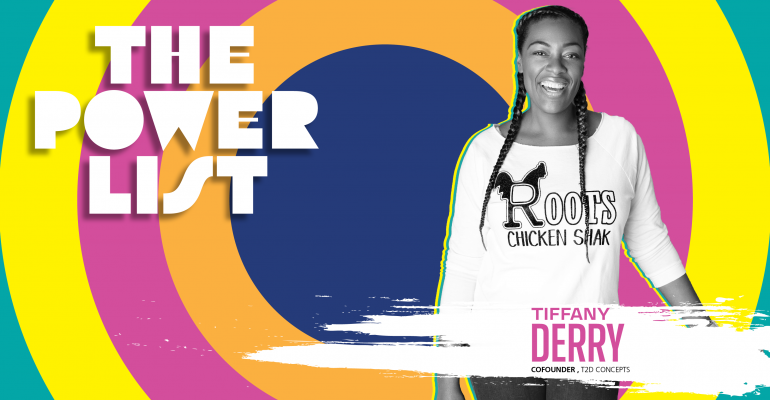 Tiffany Derry is creating a franchise model for underserved communities

Tiffany Derry is known for her duck-fat-fried chicken, but her real mission is to make restaurant ownership possible in underserved communities.

Derry’s own background is in fine dining: She earned a culinary degree at the Art Institute of Houston and then cooked abroad in Europe, Latin America and Asia before working in a number of top restaurants across Texas. She also served her fried chicken at the Obama White House not once but twice, and has appeared on TV shows including Top Chef and Bar Rescue.

She and business partner Tom Foley own T2D Concepts, which operates Roots Southern Table, a casual restaurant in the Dallas suburb of Farmers Branch, Texas, that reflects Derry’s heritage as a native Texan with Louisiana roots. They also operate two Roots Chicken Shak restaurants — one in Austin and one in Plano, Texas — which have a fast-casual business model intended to be replicated in communities where franchised restaurants often decline to go.

“We were looking at that from the very beginning,” Derry said, noting that the restaurant was designed to keep the menu simple and the prices low. It uses thigh meat instead of more expensive breast, and its vegetables are a straightforward mix of lettuce, tomatoes and onions. It has small footprints to allow for lower rent, and ordering kiosks to save on labor.

But Derry and Foley, who is a lawyer by training, are also working on structuring deals to help people in underserved communities — usually people of color and often women — own their own businesses.

They seek loan guarantee funds that will back community members who aren’t creditworthy enough to get loans on their own, and banks interested in improving their ratings under the Community Reinvestment Act, which encourages lenders to assist low- and moderate-income neighborhoods. Those ratings can be taken into account when regulators consider approval for future bank mergers, charters, new branch openings and the like.

Derry and Foley also want to work with municipalities who have a vested interested not only in improving the lot of their residents, but also in expanding their tax base by supporting businesses in communities that don’t have enough of them.

Corporate sponsors could be crucial, too, Derry said, and the communities themselves have to be involved.

“At the end of the day, all of these things have to work,” she said.

And that’s possible. Derry said that at the onset of the pandemic, they started serving free food to underserved communities, and it turned out that those communities had resources of their own, such as connections with vegetables and meat suppliers.

“So we’ve seen the power of the community, and it is strong,” Derry said. “We’ve learned that we have to literally put roots in the community. That’s what changes things.”