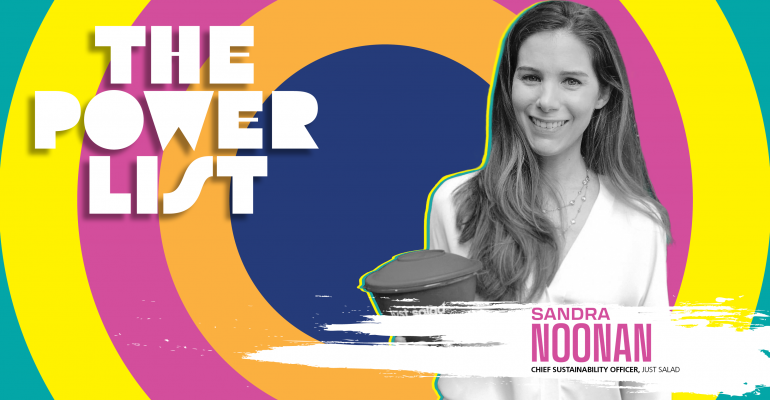 26% of global carbon emissions are created by the food system, according to Just Salad’s website, and Sandra Noonan, chief sustainability officer, was tasked with pushing the brand’s efforts forward.
News>People

When Just Salad began carbon labeling its salads in 2020, it wasn’t a novel idea. Plenty of other chains had used carbon labeling — posting the amount of carbon produced in creating the meal — before, including Burgerville and Burger King.

Still, 26% of global carbon emissions are created by the food system, according to Just Salad’s website. So there was work left to do. And Sandra Noonan, chief sustainability officer for Just Salad, was tasked with pushing the brand’s efforts forward.

In 2021, New York City-based Just Salad partnered with MasterCard on the Earth Bowl, a salad that when purchased, helped plant trees in the rainforest.

“It's resulted in tens of thousands of trees planted since its launch in September,” said Noonan.

The brand even tested a digital reusable bowl program in 2021 at two Midtown Manhattan stores. Customers could place an order online using a reusable bowl at the store rather than a single-use bowl. When it came time to return the bowl, customers could drop it off in the designated drop-off spots inside the store for cleaning and return.

Noonan said it’s still in the testing phases, but a large-scale rollout is possible. It would be the largest-scale reusable to program across the country.

Just Salad is using its menu to fight climate change, too. The chain removed beef from its menu in 2019, leaving chicken as the only meat-based option. It also serves a new product, vegan feta, along with plant-based chicken and other meat substitutes.

Brand identity is important to the chain but not as important as sustainability, something CEO Nick Kenner spoke about over the summer.

Noonan, however, thinks that the educational element needs some change.

“What I think we need to improve upon is messaging and explaining to the customer what the benefits of reuse are, besides the fact we give you free food in exchange for reducing waste,” she said.

For Just Salad and Noonan, that has meant working with academics to quantify how much water and carbon emissions the customer is saving every time they’re using one of these reusables.

It’s also to show people that it’s not hopeless.

“I hope that, more and more, we as a society get mobilized around the fact that as consumers, we really can take daily actions and vote with our dollars on culture-changing innovations,” she said. “We need to solve our ecological crises. I hope that brands like ours … shed light on the fact that it's not hopeless, and that you can do something every day to change the direction we're headed in.”