/sites/all/themes/penton_subtheme_nrn/images/logos/footer.png
Recent
Recent
The third-largest pizza chain is ready for a war
Dec 02, 2022
DoorDash’s layoffs are not a time to panic: they’re a time to rethink the delivery industry
Dec 01, 2022
How Checkers & Rally's plans to adjust as other brands adopt its double drive-thru model
Dec 01, 2022
How a local grain became the star ingredient of the stand-out pita at Gavin Kaysen’s latest restaurant
Dec 01, 2022
Subway is serving footlong cookie ‘subs’ for only one day
Nov 30, 2022
Featured
How 21 restaurant companies performed in their most recent quarters
Nov 22, 2022
How eco-friendly Seattle restaurant chain Just Poke is doubling in size in 2022
Nov 17, 2022
In the Mix this week: White Castle’s culture, a CREATE recap, Denver’s restaurant scene and more
Oct 27, 2022
How this emerging brand is planning on nearly quadrupling in size in just one year
Oct 21, 2022
Menu

McDonald’s, Shake Shack and more offer their take on the trendy chicken sandwich 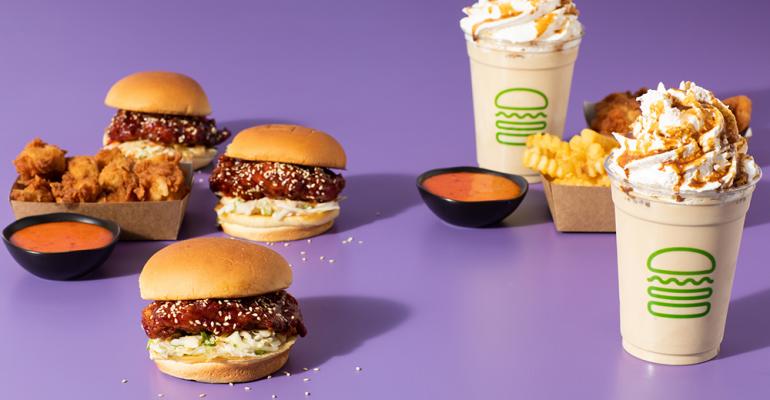 Following the explosive popularity of the Popeyes chicken sandwich in Q3 2019 and subsequent iterations from quick-service competitors including McDonald’s, Jack in the Box, and KFC, the chicken wars have been reignited, riding the wave of pandemic-era comfort food cravings.

While fried chicken sandwiches were the most-added menu item in 2020, already during the first week of 2021, there have been announcements of fried chicken sandwiches from five major chains, including the much-buzzed-about new lineup of McDonald’s chicken sandwiches, revealed on Monday. Other chains have released poultry creations that diverge from the classic ingredients of chicken, pickles, and lettuce/tomatoes, like the Korean-inspired fried chicken from Shake Shack announced Tuesday, and the mac and cheese and hot sauce-slathered sandwich from Golden Chick, which came out Monday.

Most of these chicken sandwiches are also LTOs (or former LTOs that have been brought back by popular demand with small changes), with the exception of McDonald’s, which will be a permanent fixture to the menu as the brand undergoes its previously announced new growth strategy.

Here are the five chicken sandwiches that have been announced so far in 2021.