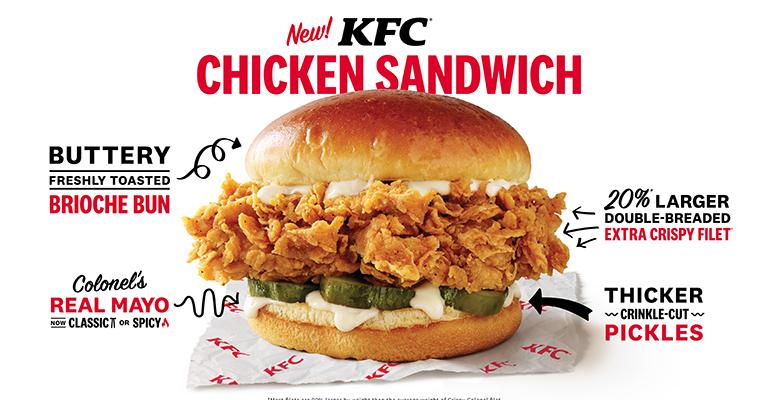 During the coronavirus pandemic, many restaurant chains have pressed the pause button on new menu development and testing.

Most brands have focused on creating meal kits and large family combo meals using existing items on their menu. But new entrée items are starting to emerge in a big way, including the latest test item at KFC.

The Louisville, Ky.-based quick-service chain is reigniting last year’s fried chicken sandwich war by testing a new premium sandwich in Florida. The KFC Chicken Sandwich is 20% larger than the brand’s current chicken sandwich. It is available May 26 through June 21 at KFC restaurants in Orlando.

Calling it the best sandwich yet to debut on the menu, the brand said the KFC Chicken Sandwich features an Extra Crispy (double breaded) chicken filet on a buttery brioche bun topped with extra-thick crinkle-cut pickles and choice of classic or spicy mayonnaise.

The test marks KFC’s entry into the chicken sandwich wars that started last year when Popeyes Louisiana Kitchen broke the internet with a social media campaign about its new chicken sandwich, which later won a NRN MenuMasters award. The Popeyes sandwich launched a fried chicken sandwich battle between various quick service players such as Wendy’s and Chick-fil-A. It also put pressure on other brands, including McDonald’s, to step up their chicken sandwich game.

KFC admitted that the chain needed a battle-worthy sandwich, and this one has been in development since before the COVID-19 pandemic.

“We wanted a chicken sandwich that really lives up to our legacy as the fried chicken experts and, let’s face it, ours wasn’t the one to beat,” Andrea Zahumensky, chief marketing officer at KFC U.S., said a statement. “We knew an upgrade was necessary, so we painstakingly selected each ingredient to create a bigger, better and more premium sandwich than ever. I think we’ve unlocked a chicken sandwich that won’t just compete – it’ll win with fried chicken lovers everywhere.”

Golden Chick also debuted a Big & Golden Chicken Sandwich on May 25, priced at $3.99.

KFC said a national rollout of the new sandwich will depend on feedback from the test market, which includes 15 restaurants in the Orlando area.

If the sandwich goes national, it’s unclear if KFC will remove the standard sandwich, the Crispy Colonel, from its menu.

“KFC will evaluate these initial test market results to determine the best way forward. Any permanent changes will depend on feedback from the test market,” the company told Nation’s Restaurant News in a statement.

The market test comes as restaurants chains have held back on releasing limited-time offers during the pandemic, according to the latest information from Datassential’s SCORES platform.

KFC’s test is occuring in Florida, one of several states where counties are allowing restaurants to open for dine-in at limited capacity. KFC said the chain does not currently have any restaurant in the system open for dine-in. Restaurants are open for drive-thru, delivery and carryout.

KFC restaurants “are taking a thoughtful and cautious approach to business decisions and dining rooms will reopen based on that approach,” the company said. “KFC is closely monitoring the COVID-19 pandemic and is making the necessary adjustments to ensure that the safety and health of employees, franchisees and customers remains the highest priority.”

Update: This story was edited to include LTO data from Datassential.