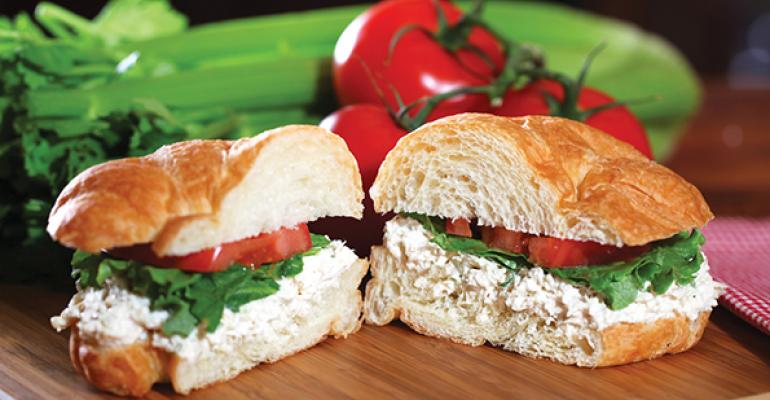 What started as a not-so-legal attempt by a single parent to earn some extra money out of her home has turned into a 29-unit chain now operating in six states and specializing in a staple of the American South.

Chicken Salad Chick offers guests a choice of 15 different chicken salads on a choice of five types of bread, a line of side dishes, tea and deli meats. About 40 percent of the salads are sold without any bread — just on lettuce — and 26 percent of sales are bulk orders of chicken salad by the pound, which contributes to the chain’s robust $13.76 average per-person check.

Co-founder and CEO Kevin Brown said the idea for Chicken Salad Chick started in Auburn, Ala., with his friend and future wife Stacy, who was recently divorced and looking to supplement her income for herself and her three children.

“She knew that chicken salad was a staple of the South and that everyone likes it a little different than the next,” he said. She developed and began selling four varieties — a traditional called Classic Carol, one with grapes and apples called Fruity Fran, cayenne-spiked Jazzy Julie, and Fancy Nancy, which is a Fruity Fran with pecans.

She sold them “basically door to door,” Brown said, and within six weeks she had “created some raving fans loyal enough to create some standing weekly orders.”

That was great, except that it drew the attention of the authorities.

“The local health department here called and asked if she was making the chicken salad in her home, and said, ‘Well, you can’t do that’,” Brown said. “Stacy called me, and I said, ‘why don’t we put pen and paper together and see if this is viable enough to put together a little takeout restaurant’.”

After one night of math, they started looking for commercial space.

Until then, Brown, a software salesman, had never worked in a restaurant and Stacy had worked as a waitress for one day.

“It was very apparent to me very early on why so many restaurants fail. I saw from day one how ignorant we were,” he added.

Brown is a self-proclaimed process and efficiency guy, and Stacy is a charmer in the front of the house.

“I rearranged the entire kitchen after I closed that first day [in January of 2008], and day two was a lot smoother,” he said.

The concept has also added pimiento cheese and house-made side items such as broccoli salad, which is the top-selling side, and a Southern-style grape salad made with red and green seedless grapes and cream cheese sweetened with brown sugar.

Deli sandwiches such as turkey hoagie and Cajun roast beef are available, but chicken salad is the star. Deli sandwiches account for only about 3 percent of sales.