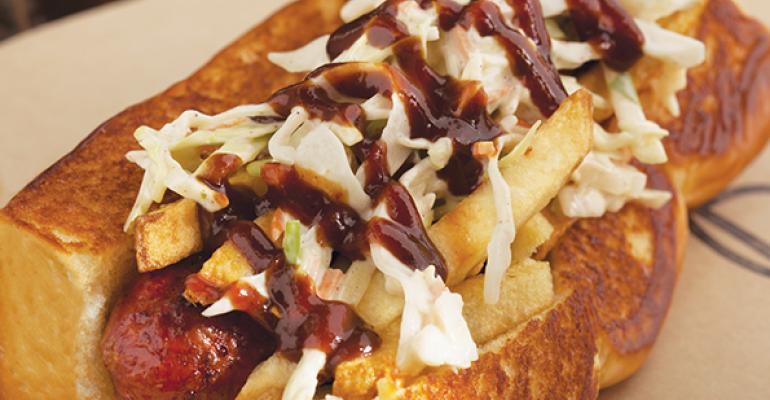 <p>Celebrity chef and Food Network star Adam Gertler takes the humble hot dog up a notch by making it all-beef, skinless, served on grilled King&rsquo;s Hawaiian rolls, and topped with a choice of about 50 exotic ingredients.</p>
News>Emerging Chains

Dog Haus is carving yet another new niche within the fast-casual segment using its rapidly growing hot dog and sausage concept.

André Vener, one of three co-founders of the Pasadena, Calif.-based chain, calls it “craft casual.”

The exotic hot dog and sausage creations are made to order, so guests shouldn’t expect to get their food in three minutes, as might be expected in the quick-service world. It’s more like six.

But the all-beef skinless hot dogs and sausages — and black Angus burgers on grilled King’s Hawaiian rolls — are topped with exotic ingredients that go far beyond the traditional chili or pickle relish.

Guests who don’t like the exotic offerings can create their own, with a range of about 50 toppings and options like pastrami-spiked hot dogs, chicken sausages or vegetarian alternatives.

This is not a five-hot-dogs for $5 kind of joint.

The sausage line was developed by celebrity chef Adam Gertler — known for Food Network shows like “Kid in a Candy Store” and “Will Work for Food” — in a way that Vener described as “clean.”

“Our hot dogs and sausages aren’t made from leftover tongue and lips and all the cheap parts,” he said. “We’re using the best cuts.”

The menu also includes sides like tater tots, regular and sweet potato fries, as well as sliders and corn dogs, shakes and malts. Craft beers and kegged wine are available as well.

Vener and partners Hagop Giragossian and Quasim Riaz, opened the first unit in Pasadena in 2010. They quickly opened two more company-owned locations, and then launched a franchising program about 18 months ago.

Five franchised units have opened for a total of eight locations, so far all in Southern California. Another 75 restaurants are in development, including units scheduled to open this year in Arizona and Colorado, with Utah soon to follow.

“We’re trying to open a store every other week,” Vener said. “We’ve built our foundation. Now it’s about getting stores open.”

The group initially had concerns about losing control of the brand with franchising, but after looking into it, they decided they could better maintain control working with local partners, as opposed to taking on a financial partner to grow, Vener said.

“We felt it was the fastest way to grow and bring the brand to all parts of America, and hopefully even outside the U.S.,” he said.

With an average check of about $13.73, most of the dishes on Dog Haus’ menu are under $10. The restaurants have an energetic vibe with a carefully curated playlist of music.

According to franchise disclosure documents for 2013, the two restaurants open the full year in 2012 booked gross sales of about $1.4 million each.

It’s a place, Vener said, where people want to hang out, making it popular as both a lunch and dinner option. About 45 percent of sales are in the evening daypart.

The three partners also own a company called Pyramid Powder Coating and Fabrication, which provides customized furniture and fixtures to the restaurants as the chain grows.

Dog Haus is not their first restaurant venture, either. Vener created and later sold a restaurant called Red White and Bluezz in Pasadena, and Giragossian and Riaz own a gastropub there called King’s Row.

The three have been deliberately trying to forge their own path as they grow.

“We want to do this organically according to what we feel is right, not how it’s supposed to be done,” Vener said. “We don’t want to hear about how things have always been done because we feel some of the brands out there are a bit stagnant.”