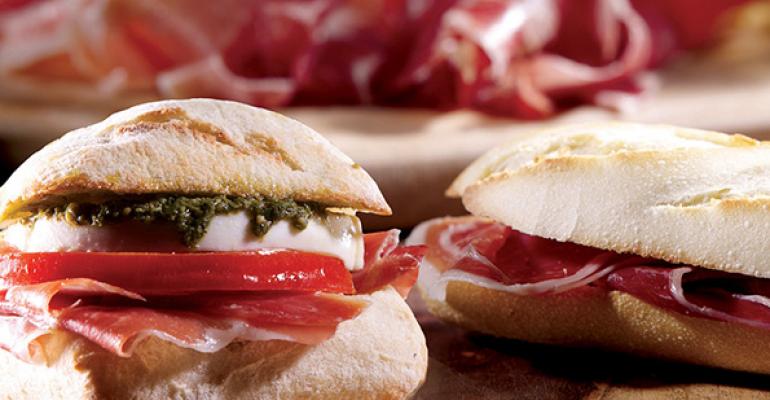 The chain, with more than 300 locations in Spain and another 50 in Portugal, Italy and the Americas, specializes in montaditos — two-to-three-bite sandwiches common in Spanish tapas bars, on tiny baguettes, made with simple but premium ingredients such as Serrano ham and smoked salmon.

Service style at 100 Montaditos is fast-casual in nature, with guests ordering at the bar and waiting for their names to be called, except in the one New York location where guests are handed numbers to display on their tables and the food is then delivered.

Montaditos are sold for as little as $1.50 each, spanish red wine starts at $5 per glass and pitchers of beer and sangria start at $8.71 and $10.89, respectively. Paella, calamari, salads, charcuterie and cheese platters and other heartier food are also available. The average per-person check in the United States is between $8 and $11 at lunch, and between $14 and $20 at dinner.

100 Montaditos started where tapas itself started, in the southern Spanish region of Andalucía. Founder José María Fernández opened a 4,300-square-foot bar near the beach in the seaside town of Islantilla, serving beer, wine and montaditos. Its success led to a second unit in the Extremadura region, and then a third in Madrid.

“That was when [Fernández] settled the headquarters and started opening more,” said operations and marketing director David Gallardo. In 2004, Fernández founded Restalia in Madrid as the parent company for the chain. The U.S. arm of Restalia is based in Miami.

There are also 100 Montaditos locations in Mexico, Colombia, Chile, Guatemala, Italy and Portugal.
The chain arrived in the United States four years ago, in Miami, and now has 17 locations — seven company-owned and 10 franchised — in Miami; Orlando, Fla.; Washington, D.C.; and New York.

Gallardo said one new franchised location is planned for both Tampa and Miami, and two more New York locations are likely to open this year as well.

The concept has had to adjust to the realities of American dietary habits, particularly at lunch, when Americans generally don’t drink alcohol. They do eat more, however — four to five montaditos per person instead of two to three in Spain.

American customers also don’t want to take the time to choose from among the 100 montaditos on the menu. In response, the brand has created combo meals of three montaditos — chosen from a list of five — fries and a soft drink for $8 at dinner and $5 at lunch.

American flavors are incorporated into the menu, too, with Philly cheesesteak, pulled barbecue pork and meatballs among the sandwich offerings.

The chain can keep prices low because of the purchasing power of parent company Restalia.

“We have a really good purchasing department, and good relations with our suppliers because we have a lot of restaurants in Spain and can get a really good price,” Gallardo said.

He added that the chain is shoring up operations before growth picks up later this year.

“We have franchisees waiting to open restaurants, but we’ll consolidate the menu and develop some new products, and then in May or June we’ll start franchising again,” he said.