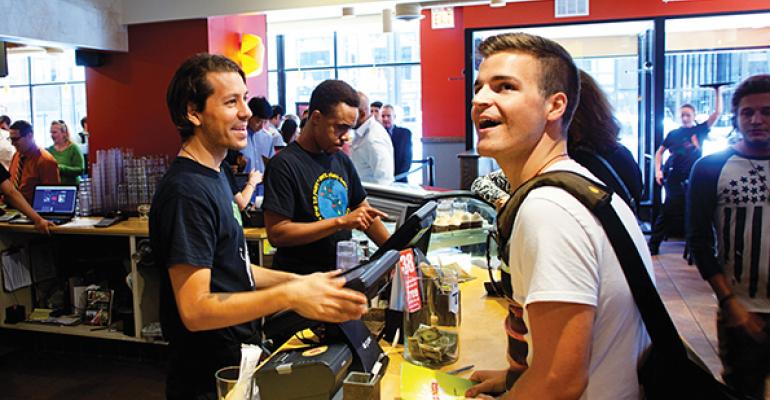 Those who feel vegan and vegetarian eating will never go mainstream probably haven’t been to Native Foods Café.

The Chicago-based fast-casual concept with an entirely plant-based menu was born in Southern California, where non-meat-eaters thrive. But it has since proven itself in the meat-loving Midwest and most recently has hit the East Coast, in the Washington, D.C. area, setting the stage for national expansion.

Andrea McGinty, Native Foods’ co-owner, said the brand has been embraced as it moves further away from the West Coast. That’s because roughly 80 percent of guests at Native Foods aren’t even vegetarian or vegan.

“We’re selling great food that just happens to be vegan,” she said. “We’re going after America.”

Native Foods was founded in 1994 in Palm Springs, Calif., by chef Tanya Petrovna, who sold the concept in 2009 to McGinty and her husband Daniel Dolan. The couple moved the headquarters to Chicago, where they lived, and set the concept on a growth path.

The capital has helped the chain accelerate growth. Native Foods finished 2013 with 13 units, and then doubled that count by the end of 2014 to 26 locations. The goal is 200 units within five years. McGinty said there are no plans to franchise.

For the first half of 2015, the focus will be on rolling out a new catering initiative among existing units, McGinty said. Then the chain will shift back to growth in the second half of the year, with six additional restaurants planned.

In 2016, the chain is expected to double again, adding 30 more restaurants and pushing into new markets, McGinty said.

Guests embraced the brand in part because, like many fast-casual concepts, food is made from scratch in house, she said. Even the “steak” for the cheesesteak subs, which is made from seitan, is made in house.

Popular signature dishes include the Chicken Run Ranch Burger, a crispy battered “Native Chicken” patty made with soy protein and grains and served as a sandwich with ranch dressing, romaine lettuce, carrots and onions on a whole wheat bun; as well as the Bangkok Curry Bowl, which features seared tofu steak on top of steamed vegetables, kale, brown rice and a lemongrass-ginger-infused coconut milk curry, topped with toasted sesame seeds and cilantro.

The average transaction is about $14.75, and most items on the menu are under $10. McGinty declined to disclose same-store sales, but Native Foods boasted an average unit volume of $1.7 million in 2014.

In the meat-free world, Native Foods has very little competition. The nearly 30-unit Veggie Grill chain, which also is pushing for national expansion, would be most comparable. But McGinty notes Native Foods competes with all restaurants.

“We’re seeing mainstream chains putting one to three vegan options on the menu now, which I love because it further educates people about vegan food,” she said. “They’re helping eradicate the stigma.”

Still, McGinty sees the market for plant-based menus like Native Foods’ as “so big and so untapped.”

“When we went into the Chicago market a little over three years ago, people laughed at us,” she said. “But our No. 1 store now is in the Chicago Loop.”