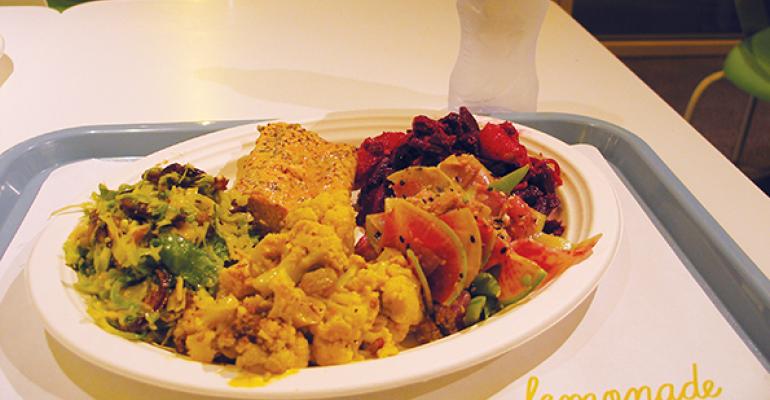 Lemonade Restaurant Group has become one of the hottest restaurant chains in the country by resurrecting a service format long forgotten: the cafeteria-style concept.

The Los Angeles-based chain is frequently saddled with the fast-casual label, but that belies its cafeteria-style service. Customers grab a tray and pick from a buffet of options.

But Lemonade is not your Grandma’s cafeteria. The 16-unit concept has succeeded by giving customers a seasonal menu of dishes with varied cultural influences, using only fresh ingredients in a format that is both convenient and affordable.

Lemonade calls its fare “Seasonal Southern California Comfort Food,” and it targets customers looking for a quick lunch or a fast grab-and-go dinner. Its menu features items like kumquat, persimmon, pickled red beets, shaved Brussels sprouts and butternut squash. It also includes culinary twists on traditional comfort food items, such as the “Not So Trashy Green Bean Casserole.” A variety of freshly made salads, sandwiches and braised items, such as barbecue brisket and beef short ribs, round out the menu.

“I like to think of Lemonade as a choose-your-own-adventure for lunch or dinner,” founder Alan Jackson said in 2013, when he announced the chain’s first Orange County location. “A delicious and healthy change of pace, Lemonade marries quality and convenience.”

Jackson spent his career in fine dining, opening The Farm in Beverly Hills in 1997. He opened the first Lemonade 11 years later, in 2008. Ian Olsen came on board as operating partner and chief operating officer a year later.

The chain’s combination of unique menu items and convenience and affordability quickly drew fans in Southern California, where it now has 14 locations — each of which have Yelp scores that are consistently through the roof.

Growth plans are top of mind. Last October, Lemonade received an undisclosed injection of capital from the private equity group KKR & Co., and it plans to use those funds to support further growth.

“We truly believed that Lemonade was at a point where it made sense to partner with institutional capital,” Olsen said in a statement at the time of the deal. “We wanted to assemble a team of world-class talent that would allow us to expand and better serve customers in our current and future markets.”