Breakout Brands of 2014: Where are they now?

NRN catches up with last year&#39;s Breakout Brands and tracks their growth trajectories. 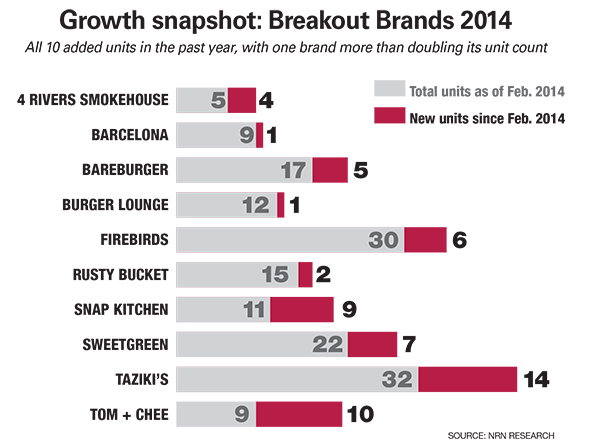 A year ago, NRN presented its second annual Breakout Brands, a slate of 10 emerging restaurant concepts that were making waves with their innovative concepts, entrepreneurial leaders and growth potential. The concepts ran the gamut in cuisine — burgers, tapas, barbecue, pub fare, salads and more — and had a wide variety of service styles, but one thing they had in common was a goal to open new stores and enter new markets.

In this special feature, NRN tracks the growth trajectories of the class of 2014 to see which brands have maintained that momentum.

In the 12 months since the brands were selected in February 2014, all 10 have opened new locations — with three brands doubling or nearly doubling their total number of units.

Collectively, the 2014 Breakout Brands grew their total unit count by 59 stores, from 162 to 221, a rate of 36 percent. The growth trajectories of the brands varied widely though, with individual year-over-year unit growth rates ranging from 8 percent to 111 percent.

Taziki’s, a fast-casual Mediterranean concept, had the largest year-over-year net gain in units, up 14 from 32 last February. Cincinnati-based grilled cheese chain Tom + Chee more than doubled its unit base during the period, growing from nine locations to 19. Two others came close to doubling their unit counts, with Austin, Texas-based health-focused concept Snap Kitchen opening nine locations to take the chain from 11 locations to 20, and the Winter Park, Fla.-based 4 Rivers Smokehouse barbecue brand expanding from five units to nine.

Sweetgreen
When fast-casual chain Sweetgreen, which specializes in healthful dishes with an emphasis on local ingredients and sustainable practices, was named a Breakout Brand last February, it was a 22-unit chain with locations in major cities along the East Coast and a $22 million minority investment from Revolution Growth, a venture capital firm founded by AOL co-founder Steve Case.

At the time, the founders of the Washington, D.C.-based chain told NRN it would expand in 2014 in Boston and New York. It did so and then some, growing to 29 units today, including four in New York and three in Boston.

In addition, late last year Revolution Growth led a second round of funding of $18.5 million, which included investments from top restaurateurs like Danny Meyer of Union Square Hospitality Group and creator of Shake Shack, and chef-restaurateur Daniel Boulud.

Now the chain has its sights set on California.

“We’re excited to be pushing west,” co-founder and co-CEO Nicolas Jammet said, adding that the first store would open in Los Angeles in late spring or early summer. “For us, California is the focus this year,” Jammet said. “We’re planting our flag and becoming part of that community.”

Other recent developments include a seasonal menu launched late last year, and a new mobile ordering app that launched this January.

“We just released our mobile ordering app a few week ago company-wide [which] allows for ordering, payment and loyalty,” Jammet said. “It’s a seamless interface.”

Jammet, who was recently named to the 2015 NRN Power List, did not give a projected number of new stores for 2015, saying plans hinge on the ability to groom leaders that would build a foundation future growth.

“We want to keep growing at the pace we’re growing and run by leaders we’ve grown from within. We almost look more at the people pipeline than the real estate pipleline. For us, it’s all about the people. We’re looking for 2016 leaders now that we can begin to groom [today].”

Snap Kitchen
Snap Kitchen is another Breakout Brand alum leveraging consumers’ desire for fresh, healthful foods — as well as their need for convenience — with its menu of prepared salads, meals and snacks packaged for grab-and-go occasions.

In February 2014, Snap Kitchen had 11 units and had recently received an undisclosed investment from Greenwich, Conn.-based private equity firm Catterton, which is known for investing in up-and-coming restaurant brands, such as Piada Italian Street Food, Bruxië and Mendocino Farms.
Since then, Snap Kitchen has grown to 20 units.

Helfman said growth to date has been focused on the Dallas, Houston and Austin, Texas, markets, but the brand plans to add two new markets, Chicago and an undisclosed city.

He said Snap Kitchen is tapping into “a revolution happening in North America” towards healthy, convenient fresh food items and said customer feedback has been great.

“People want consciously crafted food that is free of hassle and full of promise,” he said.

Helfman said that demand provides plenty of room to grow, despite competition from other health-focused brands: “We’re all growing up in this space together.”

Burger Lounge
Though it only opened one new restaurant between February 2014 and early February of this year, 13-unit fast-casual brand Burger Lounge is now shifting back into growth, CEO J. Dean Loring said.

The San Diego-based chain is scheduled to open a new location in late February and two others are scheduled to open in the next six months, he said, with a total of six to eight new locations before the end of this year. Growth this year will be focused in Southern California, where the chain already operates.

“It’s a pretty ambitious year for us in terms of growth,” he said. “We still have a lot of room to grow in Orange County.”

Loring noted that Burger Lounge “took a bit of a break” last year, following a strong 2013.

“The real estate market tightened up. Real estate price and availability was a challenge in 2014,” he said. “It seems to be loosening up now.”

Burger Lounge plans another eight to 10 new stores in 2016, including its first outside of its home market of Southern California, Loring said. Target markets include the California’s Bay Area and Las Vegas.

He indicated consumers’ desire for high-quality, natural ingredients has been integral to the chain’s success so far. Burger Lounge’s menu includes grass-fed beef and free-range turkey burgers, nitrate and nitrite free bacon, and salads made with buckwheat and baby kale.

“The better food movement is a big propeller of our growth,” he said. “Every decision we make as a company goes through the filter of, ‘Is this better for the guest, the planet and the animal.’”