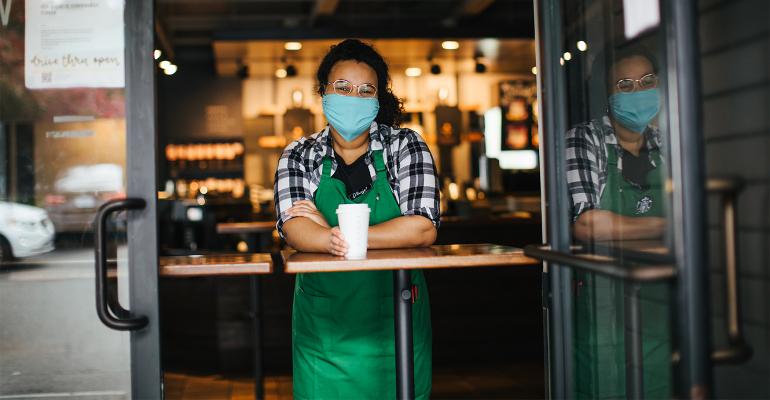 Starbucks announces third pay increase in just over a year

The company is also making several other workforce and operations investments, including recruiting specialists and upgraded equipment

Starbucks on Wednesday announced a series of investments the company is making in its workforce, including another round of pay increases, recruiting specialists and operational changes intended to make employees’ lives easier.

A Starbucks spokesperson confirmed to NRN that this will be the third such pay raise in just over a year, following a 10% increase announced in November 2020 and a 5-6% pay increase this month.

“Today, we are announcing another historic investment in our partners, knowing that when we take care of our partners, they take care of our customers, and all stakeholders benefit,” said Starbucks CEO Kevin Johnson in a statement. “This is how we continue to build a great and enduring company. One that is committed to the ideal that doing good for one another – and for society – is good for business over the long-term.”

Williams also said in her letter that Starbucks was on track to raise its minimum wage to $15 per hour nationally by summer 2022, at which time “average pay for all U.S. hourly [employees] will be nearly $17” per hour, according to a company statement. This is ahead of Starbucks’ original goal to hit $15 per hour for all employees by 2023. Current average hourly pay is $14 per hour, with more than 50% of employees making at least $15 per hour, according to a company spokesperson.

The letter from Williams also detailed recruiting changes at the store level. The company plans to add hourly recruiting specialists to each region, extend a $200 referral bonus, and add training time and practice shifts for new hires.

Williams also said that last month, Starbucks launched an update to its labor model to accommodate increased demand for cold beverages. The changes promise employees “a more accurate forecast [they] can trust, and a better staffed shift.” The company is also testing an app to help employees communicate and make sure there is coverage for shifts.

Other improvements announced include rolling out Masterna II espresso machines, cold breweres and MerryChef ovens to every store, as well as other technology upgrades to save time in stores. Starbucks is also testing cold beverage station redesigns in its innovation labs and will begin testing in stores in January “to make it easier to handcraft drinks and connect with customers.”

“Our founder Howard Schultz believed in the dignity of the human experience, in building a successful company, and that our success should always be shared,” said Williams in a statement. “These new investments show the continued commitment we all have to creating the best opportunities and experience for our partners.”

These changes come amid a labor shortage impacting restaurants nationwide.

Over the summer, employees at three Buffalo, N.Y.-area Starbucks units began the process of unionizing; last week, the company was accused of union busting by organization group SBWorkers United.