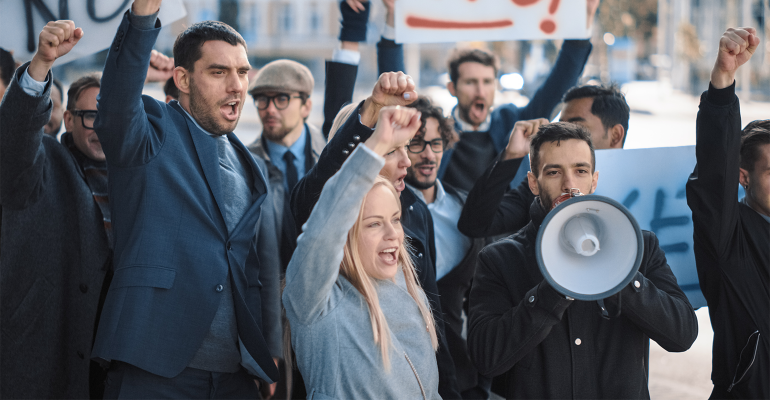 credit: gorodenkoff/iStock/Getty Images Plus
Unionization attempts have rarely been successful in the restaurant industry.
Operations>Workforce

These Starbucks employees are attempting to unionize: Here’s why that’s a big deal for the restaurant industry

A group representing three Buffalo, N.Y.-area Starbucks filed a petition to unionize with the National Labor Relations Board; foodservice remains the least unionized industry in America

On Tuesday, SBWorkers United filed a petition with the National Labor Relations Board to formally vote to unionize three Starbucks stores in the Buffalo and Hamburg, N.Y. areas.

This is a major milestone because Starbucks employees at all 8,000 company-owned stores have never been formally unionized in the long-term, and previous attempts to organize have often resulted in illegal terminations and subsequent lawsuits.

Earlier this summer, for example, two former Philadelphia Starbucks baristas won a legal battle against the coffee giant after workers were fired nearly two years ago for attempting to form a union. A Philadelphia administrative law judge ruled in June that the workers had the right to organize themselves and ordered Starbucks to reinstate the workers with backpay. The company is appealing the decision and does not have to reinstate the employees until the process – which could take months — is complete, according to the Philadelphia Inquirer.

In the case of the Buffalo Starbucks workers, SBWorkers United began gaining steam as a labor union movement in late August, announcing an organizing committee on Aug. 23 in a formal letter of intent sent to CEO Kevin Johnson.

“We believe there can be no true partnership without power-sharing and accountability,” the letter reads, adding that “we do not see our desire to organize as a reaction to specific policies but as a commitment to making Starbucks, Buffalo, and the world a better place.”

In response to the letter, Starbucks deemed the labor organization effort “unnecessary:”

“While Starbucks respects the free choice of our partners, we firmly believe that our work environment, coupled with our outstanding compensation and benefits, makes unions unnecessary at Starbucks,” Starbucks said in a statement sent to Nation’s Restaurant News. “We respect our partners’ right to organize but believe that they would not find it necessary given our pro-partner environment.”

Since the organization just filed a petition with the National Labor Relations Board, the process of approval for a vote could take two to three months. Once the notice of election goes out, a majority of workers would have to vote in favor for the union to be formally certified by the federal government. The goal, SBWorkers United told Nation’s Restaurant News, is to organize at least one union for the area and to get Starbucks to sign on to an “ethical code of conduct” if union workers launch a campaign to make changes within the company.

“Our goal is — as our slogan, ‘Partners Becoming Partners,’ states — to have a voice and an equal partnership with Starbucks management,” Alexis Rizzo, a representative with SBWorkers United, said. “We are pro-Starbucks and pro-union. In fact, we are Starbucks, and our union, we believe, better represents the value of this company than Kevin Johnson's anti-unionism.”

Starbucks’ resistance to its employees unionizing is hardly an unusual story for American capitalism, but the restaurant industry appears to have less formal labor organization than other industries. In fact, according to 2019 data from the Bureau of Labor Statistics, the foodservice industry is the least unionized, with only 1.2% of employees represented by unions. Comparatively, more than one-third of the education industry is represented by unions.

So, why has the foodservice industry been sluggish in its formal labor organization efforts? Krista Mitzel, managing partner of San Francisco-based law firm The Mitzel Group, thinks it might have to do with the high turnover rate of the restaurant industry, which naturally attracts a more transient workforce than the education, construction, and local government industries, all of which have much higher unionization rates.

“Over the years, the sentiment for unions has changed,” Mitzel said. […] Unions were meant to protect workers who couldn't negotiate. So when the government came in and increased wages, and forced employers to provide more benefits, it took some wind out of their sails. […] There are a lot of benefits still to being part of the community a union provides […] But most restaurant workers are in the job for a short period of time and they aren’t necessarily lifers.”

This might have been the case with Colectivo Collective, which represents the largest café company to unionize with five coffee shop locations in the Chicago area. After a contention over a deadlocked vote, the National Labor Relations Board counted additional votes last month that were originally challenged by the parent company because they were former employees who worked with Colectivo at the time of the vote but no longer do so. On Aug. 23, the Colectivo Collective became a part of the International Brotherhood of Electrical Workers.

In response to the news of unionization, the Colectivo Coffee company alleged that the vote was unfair. With the restaurant industry’s high turnover rate, former employees that have since moved on to another employer since the time of the vote would likely be an issue for any foodservice company voting to unionize. Whether or not to count votes from employees that might subsequently leave the company during the unionization process would have to be laid out before the vote begins.

“We don’t think those former coworkers should have been allowed to have a voice in unionization at an organization where they did not intend to work,” Colectivo said in a statement. “The outcome is the result of a process that took place last spring and our employee census is dynamic.  At final count, less than one third of the eligible co-workers supported the union, and as of today, it is our best estimate that fewer than 100 of our current 440 co-workers voted for this union.”

Starbucks and Colectivo are not the only unionization efforts that have been ramped up in this era of the pandemic. Tartine Union, organized by the employees of the popular bakery in San Francisco and Berkeley, announced in March that they have been officially recognized as a union after the vote was formally counted by the NLRB. Like Colectivo, 24 ballots were contested and eventually thrown out as Tartine employees alleged that the company had hired a portion of these workers specifically to vote against unionizing. Tartine also allegedly held mandatory ant-union meetings for all employees during this process, according to Eater. Intimidation, coercion and retaliation against voting for unionization is illegal under the National Labor Relations Board’s rules and regulations.

In another case, Portland, Ore. Voodoo Doughnuts employees failed at an attempt to vote to formally unionize earlier this year. In July, employees alleged that multiple workers were fired after walking out on the job due to extreme heat and uncomfortable working conditions, according to Oregon Live. Doughnut Workers United — the unofficial organized labor representation of these employees — said it would respond to these job terminations with legal action. These employees could very likely win that battle, even if their union is not officially recognized by the NLRB.

“If a company takes action against someone for engaging in protective activities, such as attempting to unionize, that's called retaliation,” Mitzel said. “And that is an actionable claim that an individual who was terminated because of that could file a lawsuit against the company.”

But even with the increased labor organization activity, Mitzel still thinks it’s more likely that unhappy employees will act independently through strikes like the “Fight for 15” protests, or by simply moving on to other industries.

“I think that you might see more unionizing going forward, but I actually think that the industry itself is going to have to change in order to draw in more workers in,” Mitzel said. “Companies have to change their tactics and be smart because regardless of whether there's a union or not, if you can't get workers, you can't survive.”