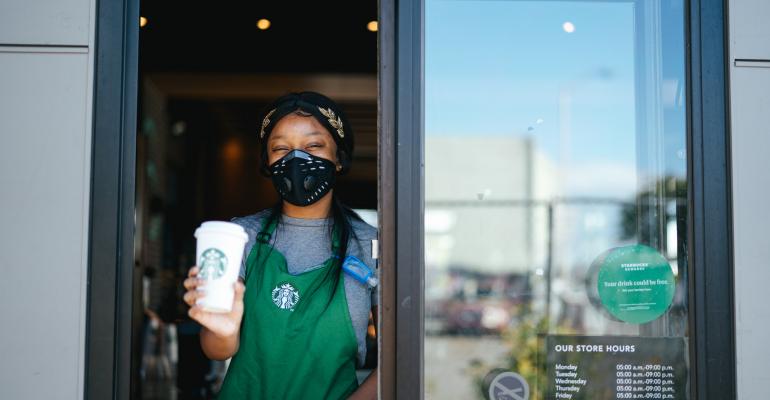 Starbucks
The Starbucks pay increase includes a 10% raise for baristas, supervisors and café attendants and an 11% raise for employees that have worked with the company for at least three years.
News>Quick Service

Starbucks is giving every U.S. employee a raise of at least 10%

Starbucks is giving all U.S. employees a raise of at least 10% that will go into effect on Dec. 14, an internal memo first reported on by Business Insider on Wednesday said. The pay increase includes a 10% raise for baristas, supervisors and café attendants hired on or before Sep. 14; an 11% raise for employees that have worked with the company for at least three years; and a 5% pay increase for all starting salary rates. The company will also increase the premium that Starbucks pays above minimum wage in every market.

The news broke two months ahead of inauguration day for President-elect Joe Biden, who has vowed to raise the minimum wage to $15 an hour.

Starbucks confirmed the pay raises in a statement.

“For nearly 50 years, Starbucks has been a leader in providing relevant, industry-leading benefits and a total compensation approach that is best-in-class for both part and full-time employees,” a Starbucks representative told Nation’s Restaurant News. “Continuing in that tradition, this announcement is the next phase of our commitment to ensuring the well-being of partners (employees) with one of the most significant investments to hourly pay in the U.S. in the history of the company.”

Related: Starbucks links executive compensation to company diversity goals, commits to a corporate workforce of at least 30% BIPOC by 2025

Starbucks employees have been vying for pay raises for a long time. Multiple online petitions signed by thousands of baristas are circulating online, demanding that the company raise their starting wages to $15 an hour, with one petition on Coworker.org with nearly 9,000 signatures stating that even the COVID bump pay at “$12 an hour is not a livable wage” and that employee morale has notably plummeted.

In Biden’s Main Street recovery plan, which he released on his transition website earlier this month, the president-elect confirmed thar his administration would prioritize not only raising the nationwide minimum wage to $15 an hour, but also ending tipped minimum wages and sub-minimum wages for people with disabilities. Other worker benefits would include universal paid sick days and 12 weeks of family and medical leave per year.