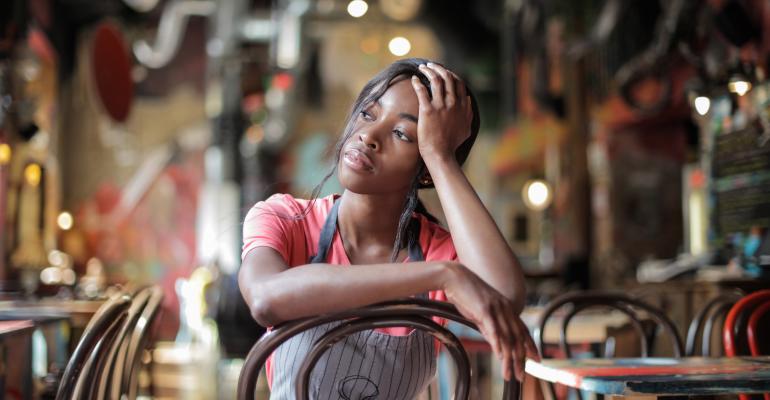 More than two-thirds of current and former restaurant workers said disrespect from customers is a factor in the industry’s labor shortage, according to a new report by Black Box Intelligence released Monday.

The report taps data from a survey of more than 4,700 current and former hourly restaurant workers conducted with Snagajob. The goal was to look more closely at the factors that are contributing to the current labor shortage that has restaurant operators across the country struggling to find new workers and keep the staff they have.

Not surprisingly, compensation is a key factor, and “right now employees have the upper hand,” said Victor Fernandez, Black Box’s vice president of insights and knowledge.

In the second quarter this year, limited-service hourly worker pay increased 10% year over year. That’s up significantly from the 4.1% increase in the first quarter.

Line cooks in full service saw a 6% increase in Q2, 3% higher than the increase seen in Q1 this year.

But workers also cited factors like scheduling, childcare and overall concern about their mental and physical health.

Workplace culture was less a factor, Fernandez said, but that may change as the industry reaches a new equilibrium and wages stabilize. “We see now that states with the highest minimum wage have the lowest turnover rates,” he said.

Across the country, full-service restaurants are operating with 6.2 fewer employees in the back of the house and 2.8 fewer workers in the front of the house, compared with pre-pandemic staffing levels, the report estimates.

The Bureau of Labor Statistics reported that job openings have increased to a series high of 10.1 million in July, with accommodations and foodservice accounting for a large portion of the increase.

That has resulted in a “job candidate’s market,” the report said.

Still, 66% of respondents said they would return to the industry if the right conditions were met, the report found.

“For the first time in decades, the American hourly worker has the upper hand in wage conversations,” the report said. Millions are asking themselves if they’re satisfied with their current job. In response, restaurants are offering better compensation packages and incentives.

“In essence, companies are recognizing [increasing compensation] is what they have to do, but the challenge is that costs are going up, not only from the labor side, but also on the food side,” said Fernandez. “So a lot of restaurants are feeling the squeeze there.”

Recent reports indicated the average pay for restaurant and grocery workers is now above $15 per hour for the first time. But Black Box research, which focuses more specifically on restaurants, indicates that’s not true for all workers just yet.

According to the survey, 29% of respondents said they were drawn to the restaurant industry for its earning potential, including tips. But more than half (51%) said the flexible hours were a key factor. Others cited the fast-paced environment (43%) and the social aspects of the job (30%).

A surprising 87% of respondents said they would rather have a set liveable wage than tips.

Here are the five most important things restaurant workers look for in a new job:

The staffing crisis has also hit daycare facilities and hourly restaurant workers with children are unable to rejoin the workforce because of lack of childcare. McDonald’s officials said the lack of childcare is the top reason workers say they can’t return to work, the report said.

According to Snagajob data, 35% of current hourly workers and job seekers are parents, and 18% of unemployed hourly workers had to leave jobs to take care of family or children.

In 2020 alone, women around the world lost more than 64 million jobs, representing about 5% of the total jobs held by women. Most left the workforce to provide childcare.

Opportunities in other industries.

When restaurants were shuttered during the pandemic, many workers switched to other sectors, such as warehousing and logistics. They’re not leaving the workforce. They’re leaving the restaurant industry.

Nearly one third (28%) said they left for higher pay, and 23% said they needed a more consistent schedule/income, according to the survey. But 17% cited the lack of professional development and promotion opportunities, and others blamed the work hours (16%) or work culture (15%).

Concerns about mental and physical health

It has been a tough 18 months and many people are prioritizing mental health. Many workers also say they don’t feel safe coming to work in restaurants because of the fear of exposure to COVID.

The report found that 65% of hourly workers want businesses to require customers to wear masks, and 83% of those worker said they plan to wear a mask while working to keep themselves safe, regardless of local requirements.

Still, mask requirements are likely one issue that has resulted in the emotional abuse and disrespect from customers that workers are reporting.

In terms of the emotional abuse from managers, it’s not clear how that compares with pre-pandemic days, said Fernandez. Even before COVID, hourly workers may have perceived abuse from their managers.

And those managers are also under a lot of pressure as a result of the staffing shortage, he noted.  “We heard stories about managers having to go in the kitchen and cook because people didn’t show up.”