Now based in Luxembourg, the company was incorporated as Benckiser, a chemical producer in Germany, in 1823. It expanded to household products and cosmetics in the 1980s and in 1999 it merged with Reckitt & Colman to form Reckitt Benckiser.

JAB itself was formed in 2012 and it purchased Peet’s Coffee & Tea soon after. It then went on to purchase Caribou, Einstein and Espresso House. It bought Krispy Kreme in 2016, taking it private, and did the same with Panera Bread in 2017. It formed Keurig Dr. Pepper in 2018 when it merged Dr. Pepper Snapple with Keurig Green Mountain. It bought its pet care concerns and Pret a Manger in 2019. It took a company including Peet’s and Jacobs Douwe Egberts public in 2020, and Krispy Kreme filed for an initial public offering in May of 2021. In June JAB purchased Australian coffee chain Campos Coffee. 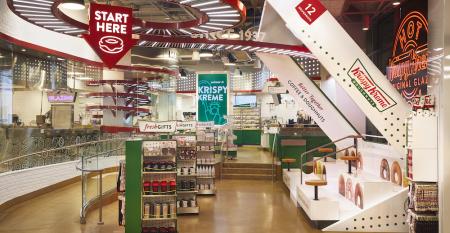 JAB Holding announces plan to bite off another 6.5 million shares of Krispy Kreme
Dec 02, 2021
Swap agreement is in line with strategy to take brands public but maintain anchor stake

Krispy Kreme is set to raise $600 million for company’s second IPO
Jun 22, 2021
The doughnut chain’s second initial public offering will likely be valued at around $3.8 billion

Krispy Kreme files for IPO
May 05, 2021
JAB Holding-owned company Krispy Kreme confidentially filed a draft registration for an initial public offering after five years of being a privately-owned company

Krispy Kreme’s New York City flagship finally opens with 24-hour pickup and the tallest glaze waterfall in the nation
Aug 26, 2020
Krispy Kreme has finally opened its flagship location after a three-month delay due to the pandemic