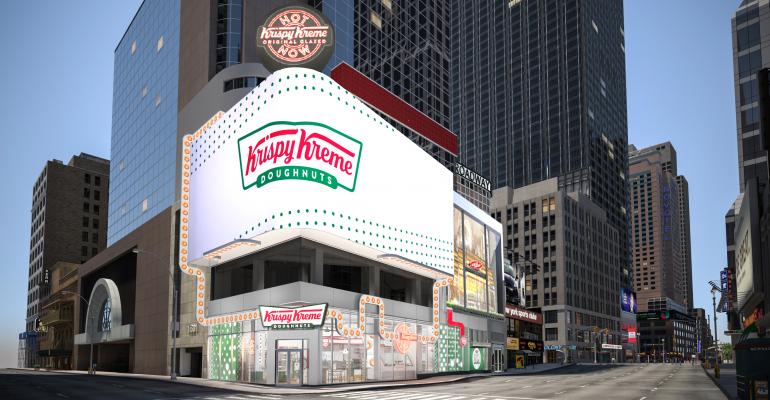 The doughnut chain’s second initial public offering will likely be valued at around $3.8 billion

JAB Holding Company-owned Krispy Kreme is looking to raise $600 million through an initial public offering later this year, according to regulatory documents filed with the U.S. Securities and Exchange Commission on Tuesday.

This is the second IPO for the North Carolina-based, 1,500-unit doughnut chain. The company first went public in 2000 but was taken private by Panera and Pret a Manger parent company JAB Holding in 2016. Krispy Kreme’s initial public offering price is expected to be around $21.00 and $24.00, with an overall valuation of $3.8 billion.

The company first went public with its IPO filing on June 1 , initially estimating that it would raise $100 million, though they number has sextupled in size.

Krispy Kreme, which also owns Insomnia Cookies, touts itself as an “omnichannel business” with its doughnut and cookie shops, as well as a “rapidly growing e-commerce business.”

“In recent years, we substantially invested in our business to accelerate performance and position us for long-term, sustained growth,” Krispy Kreme said in the SEC filing. “We have invested in our omni-channel model, brand positioning, product quality and innovation capabilities.”

As initially reported earlier this month, the company generated $1.12 million of net revenue in 2020, with a net income loss of $60.9 million. The company made $321.8 million in revenue for the first quarter of 2021, ended April 4, up 23% from $261.2 million the same quarter the year prior. The filing also noted that Krispy Kreme achieved its highest level of sales — $1.1 billion — in the company’s history in 2020 during the COVID-19 pandemic.

Krispy Kreme will trade on the Nasdaq under the ticker name DNUT.