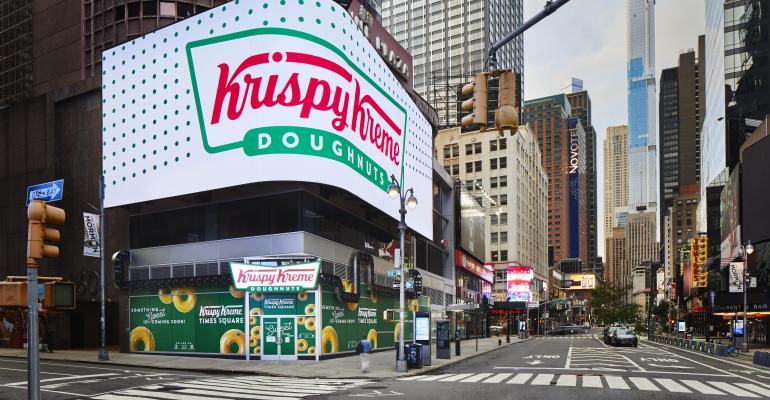 JAB Holding-owned Krispy Kreme has confidentially filed a draft registration for an initial public offering with the U.S. Securities and Exchange Commission, which would bring the company public again after five years after parent company JAB holding had taken it private.

Krispy Kreme first went public in 2000 but had to file Chapter 11 bankruptcy following financial restatements and investigations into its accounting practices. The company was then bought by JAB Holding Company in 2016 in a $1.35 billion deal as the holding company was betting on the popularity of coffee companies. The brand has been a private company ever since.

Krispy Kreme’s coffee/doughnut chain rival, Dunkin’ was bought by Inspire Brands for $11.3 billion (or $106.50 a share) in December 2020, making it one of the largest acquisition deals in restaurant industry history.

The last major restaurant chain to announce an IPO was Muscle Maker Grill, which announced a $7.7 million IPO in Feb. 2020, starting at $5 a share. Krispy Kreme is not the only coffee chain to be preparing to go public this year: according to Bloomberg, Dutch Bros. Coffee is preparing an IPO sometime this year backed by equity firm TSG Consumer Partners, estimated to be worth about $3 billion.

The number of shares Krispy Kreme will offer and the price range for the IPO has not yet been determined. The IPO will take place after the SEC completes its review process of the draft registration.