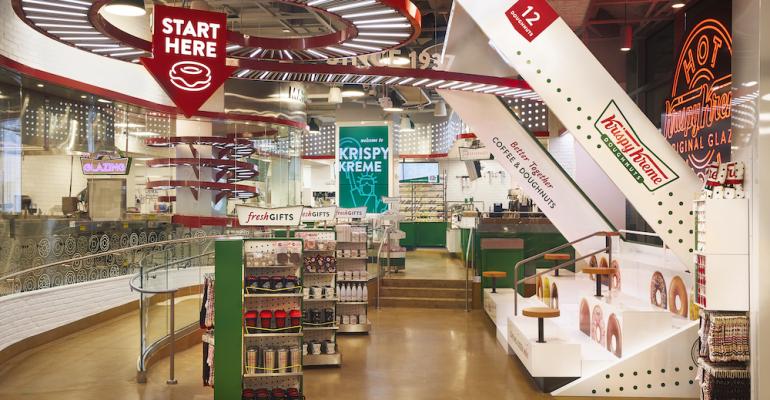 JAB Holding announces plan to bite off another 6.5 million shares of Krispy Kreme

JAB Holding said it is entering into a three-year total return swap agreement with BNP Paribas for up to 6.5 million shares of Krispy Kreme Inc. in aggregate.

Krispy Kreme went public in June after about five years of private ownership by JAB Holding, but the investment giant — which has offices in Washington, D.C., London, Amsterdam, Sao Paulo, Luxembourg and Mannheim — remained a large shareholder of the doughnut chain, holding about 44% of outstanding shares.

With the recent transaction increasing its exposure, JAB said it believes there is significant long-term value creation to come in Krispy Kreme and the investment firm intends to remain an anchor for many years — possibly decades or more, the company said.

Under the terms of the agreement, BNP will acquire shares of Krispy Kreme in the open market over the next few months, and BNP will be required to pay JAB the difference from any positive stock price performance until the end of the swap in three years. Conversely, JAB will be obligated to pay BNP the difference from any negative stock price performance during the same period.  BNP will hold all voting rights for the acquired stock, while JAB will receive any dividends paid on the shares.

JAB said the move is in line with the company’s strategy of investing in world-class brands and businesses that have significant upside for years to come. The strategy has been to take a controlling stake, develop companies privately, then take them public while keeping a hand in as an anchor shareholder to reap the long-term benefits.

The strategy is also playing out with Panera Brands, which is planning an IPO through a special purpose acquisition company, or SPAC, known as “HUGS” and led by New York restaurateur Danny Meyer.

Similar to the Krispy Kreme story, JAB Holding bought a controlling stake in Panera Bread in 2017 in a $7.5 billion deal. Later, JAB formed the new Panera Brands, wrapping in Caribou Coffee and Einstein Bros. Bagels to “turbocharge growth,” the company said at the time.

After the proposed IPO, JAB plans to maintain a significant stake in Panera Brands for the long term.

For Krispy Kreme, the announcement comes after strong third-quarter performance. The Charlotte, N.C.-based company has grown its outlets around the world to more than 10,000 locations, a 46% increase year over year.

But Krispy Kreme’s performance was boosted in part by price increases, and some analysts reportedly questioned whether the ongoing inflationary environment could hurt the pricing power some brands feel they have to offset headwinds.

JAB Holding, however, sought to quell such fears by reiterating its confidence in the brand.

“Today’s announcement is another strong indication of JAB’s confidence in the long-term potential of Krispy Kreme and its growth prospects,” said David Bell, JAB senior partner, in a statement. “Through this transaction we will gain additional exposure to Krispy Kreme, while continuing to secure our position as a long-term investor in its future.”