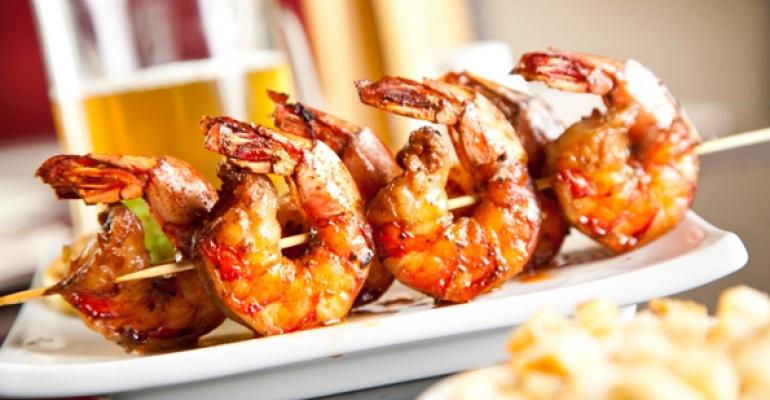 Rising prices didn&rsquo;t stop restaurant chains across the country from putting the crustacean on menus.

Many chains introduced shrimp and fish during Lent, as they do every year, but Taco Cabana made its seasonal Shrimp Tampico — marinated with ancho chile and other spices — a permanent option in tacos or quesadillas, priced at $6.89.

El Pollo Loco also strayed from its usual chicken items with shrimp limited-time offers introduced in May, starting at $2.99, though prices varied by location.

Surf and turf items with shrimp started to appear in May, when Applebee’s introduced a Margarita Queso Chicken & Shrimp, starting at $9.99, which had chipotle-lime shrimp and grilled chicken in a cilantro-lime glaze served over Mexican rice, white queso, corn and black beans, with avocado, chopped cilantro and lime on the side.

Cheddar’s Casual Café, a 130-unit casual-dining chain, also introduced chicken and shrimp as a “Lighter Side” item with fewer than 575 calories. Chicken breast and grilled shrimp were glazed with sweet chile sauce and served over ginger rice and a salad tossed with tomato-herb vinaigrette, priced at $8.49.

P.F. Chang’s introduced Vietnamese Noodles with Steak & Shrimp, featuring marinated shrimp with flank steak, rice noodles and vegetables, at its 207 locations. The item was priced at $12.95.

Olive Garden introduced its first hamburger in December, overshadowing new “Lighter Italian Fare” items, including a baked tilapia and shrimp dish with fewer than 575 calories, available at its 832 locations for around $15.99, depending on the location. The dish is served with white wine sauce and garlic broccoli.

Despite shrimp’s health halo, many chains still fried the crustacean. Panda Express introduced Tangy Jumbo Shrimp, batter-fried with sugar snap peas and red bell peppers and tossed in its new tangy Asian seafood sauce as a limited-time offer in the beginning of the year.

In late November it introduced Sriracha Shrimp, with Sriracha sauce, string beans and red bell peppers. All of the items were available for a $1 markup on the chain’s regular buffet price.

Besides shrimp, a variety of fish, including salmon, tilapia and swordfish, also got new treatments in 2013, with many introduced for their healthful qualities.

Gordon Biersch Brewery Restaurant put tilapia on the menu at its 33 locations in March. The fish was coated with a sesame-almond crust and served with baby arugula salad tossed in lemon vinaigrette, priced at $15.95. The casual-dining chain also offered a grilled swordfish steak with lemon vinaigrette and quinoa kale pilaf, priced at $20.95.

P.F. Chang’s offered a Grilled Pineapple-Citrus Swordfish this summer, served over rice and summer vegetables and topped with daikon sprouts, priced at $19.95.

A number of restaurants, including First Watch, introduced salmon this year. In May, the family-dining chain added a Smoked Salmon and Spring Chive Scramble, priced at $8.59, to the breakfast menu at its 130 locations.

Cheddar’s offered salmon glazed in citrus and miso and served on ginger rice with a side of steamed broccoli, priced at $7.99.

And Margaritas Mexican Restaurant, with 23 units in the Northeast, offered a habanero-lime salmon with Mexican corn and rice, priced at $15.99.

Tuna found its way onto many casual-dining menus this year, including 543-unit T.G.I. Friday’s, which added Ahi Tuna Crisps to its “Taste & Share” menu. The tuna was seared with blackening spices and served on tortilla chips with guacamole, jalapeños, Sriracha sauce and avocado vinaigrette, and drizzled with cucumber-wasabi ranch dressing, priced at $6.99.

Champps, too, offered a Four Pepper Spiced Tuna appetizer with pickled cucumbers and creamy wasabi spice as part of its low-calorie “Off-Season Training Menu” of an appetizer and entrée, starting at $9.99.

In July, Rock Bottom Brewery introduced an ahi tuna appetizer, priced at $9.95, rolled in spices, blackened and served rare with wasabi cream, and a seared blackened ahi tuna salad made with baby greens, Granny Smith apples, avocado, garbanzo beans, sunflower seeds and a choice of dressing, priced at $12.95 at its 32 restaurants.