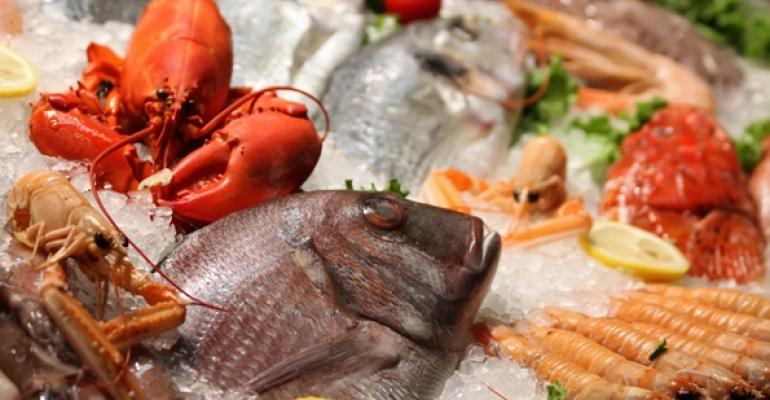 While overall seafood consumption in the United States has fallen, restaurateurs and research confirm that consumers are showing more interest in certain types of fish and shellfish.

Menu research firm Datassential lists more than 80 seafood items that are appearing on more menus now versus a year ago. Many of those items, such as branzino and striped bass, are starting from a relatively low base, appearing on fewer than 2 percent of all menus monitored by Datassential. But others, such as tilapia and grilled salmon, have shown sustained growth in recent years.

Forbes even put octopus on its list of top food trends for 2013, noting that imports of the mollusk increased nearly 40 percent between 2010 and 2012.

Anecdotes from chefs support the data. 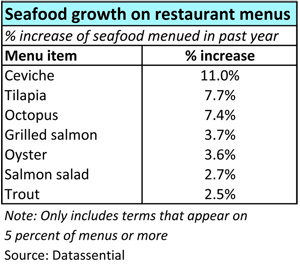 “I haven’t seen a reduction in [seafood] sales,” said Adam Higgs, executive chef and owner of Acadia in Portland, Ore. “If anything, we sell more seafood than other items.”

Ben Pollinger, executive chef of Oceana in New York City, said he sees demand growing particularly for wild products, such as Alaska salmon and New Orleans shrimp. “There is also an increase in demand for oysters. Guests are becoming more knowledgeable about them and appreciate the nuances of the different varieties,” he said.

Hugo Marin, president of Margaritas Mexican Restaurant, a 24-unit casual-dining chain based in Portsmouth, N.H., said he has seen an increase in tilapia at his restaurants, driven by the popularity of fish tacos. “We also have recently introduced salmon, sushi-grade tuna and mahi mahi to our menu,” he said. “We’ve seen good movement in all of those, as they are items not previously found at our restaurants.”

Andrea Carbine, chef-owner of A Toute Heure in Cranford, N.J., said her customers are becoming increasingly interested in where their seafood comes from. “We provide our customers with where it was caught, often how it was caught, and any pertinent information about the fishery or type of fish,” she said.

Mike Ransom, executive chef of Jasper’s Corner Tap & Kitchen in San Francisco, said he’s seen a “huge increase” in seafood sales in the past year. His salmon tartare and fish and chips remain popular, he said, adding, “We’re selling more mussels and salmon than ever before.”

Salmon is on 40 percent of menus monitored by Datassential, but that has grown by just 0.7 percent over the past year. Mussels appear on 16.5 percent of menus, a 1.2-percent increase.

John Folse, chef-partner of Restaurant R’evolution in New Orleans, said a 2013 report from the Louisiana Department of Culture, Recreation and Tourism shows culinary tourism on the rise in the state. That has translated to growing interest in local shrimp, blue crab and crawfish, he said.

The United States’ Food & Drug Administration’s Dietary Guidelines have also boosted demand, he noted, which recommend that 20 percent of protein intake come from seafood. “Health-conscious consumers recognize fish and shellfish contain high-quality protein and other essential nutrients and are an important part of a healthful diet,” he said.