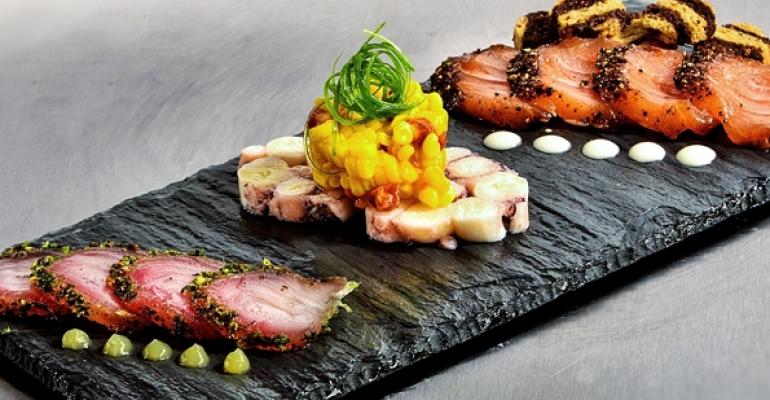 Charcuterie boards are all the rage these days. Generally featuring sliced meats, pâtés or both, these shareable, low-carb and usually gluten-free items fit well with many current dining trends. And since they’re prepared ahead of time, they augment a restaurant’s offerings without overwhelming the kitchen during service.

Aaron Black, chef of PB Catch Seafood & Raw Bar in Palm Beach, Fla., has found a way to make this meat-heavy menu item fit his concept by making charcuterie-style items out of seafood. His Seacuterie board has proven popular with guests, who can buy a choice of three items for $16 or a platter of six items for $29.

For example, he makes an octopus torchon inspired by a traditional method for preparing foie gras.

A foie gras torchon is made by wrapping fatty duck liver in a towel, poaching it and chilling it. For the octopus torchon, Black rolls octopus tentacles in a long tube, poaches them in water infused with garlic and rosemary, and freezes them for about four hours. Then he slices the octopus and serves it at room temperature with pickled sweet corn and Spanish chorizo.

The poaching liquid from the octopus is used as a base for cioppino, a San Francisco-style fish stew.

“We don’t waste any flavor,” he said. “I’ve really found that I prefer a clam broth or an octopus jus over a fish fumet [or a concentrated stock, the traditional base for cioppino], because a fumet overwhelms everything.”

Black also cures sea bass and kampachi. To cure kampachi, he places the fish in equal parts sugar and salt flavored with lime zest, cilantro and Sichuan peppercorns. He spins the mixture in a food processor to release the oils of the aromatic elements, coats the hamachi with it and lets it cure for three days. Then he slices it thinly and serves it with a cilantro-lime crema.

“It has some nice citrus notes, and earthiness from the Sichuan peppercorns,” Black said.

To cure sea bass, he places the fish in red miso and lets it sit, chilled, for about a week. Then he wipes it off, freezes it for about four hours, and slices it.

“The miso draws out the moisture, and the freezing tenderizes it,” he said.

He serves the cured sea bass with shiitake mushrooms that he cooks slowly in butter until crispy, “like lardons,” he said. He serves the dish with a sake aïoli, made by adding a sake reduction to two eggs and emulsifying it with vegetable oil.

Also on the Seacuterie menu is a mussel pipérade, named for a Basque tomato-pepper sauce. Black starts by steaming open the mussels with white wine. Then he smokes them for 30 minutes over apple wood, leaving them in their shells to keep them moist.

He removes the mussels from their shells, submerges them in olive oil and lets them sit for three days to let the smoke permeate the olive oil. He adds garlic, roasted peppers, basil, oregano and preserved lemon to the mixture and lets it sit overnight. He serves the dish in a glass ramekin with toast points.