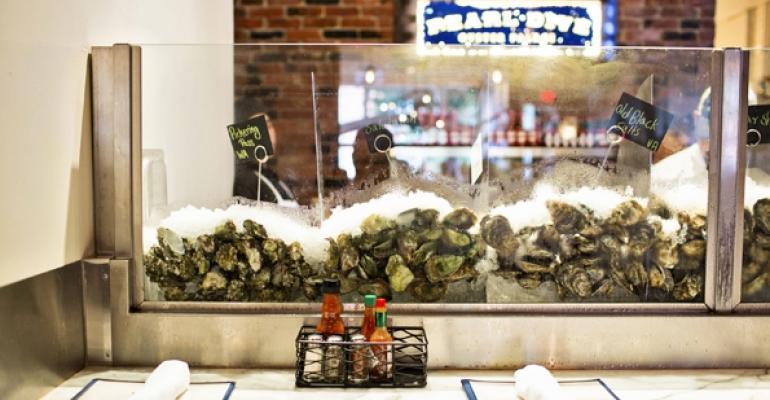 Each week, several precious wooden boxes about the size of a half case of wine are delivered to Il Buco in New York City. Inside are 60 nearly identical Shigoku oysters, farm-raised in the Pacific Northwest.

A few decades ago, Hough, who is committed to using sustainable ingredients, might have served wild-caught oysters, but a century of over-harvesting, disease and declining water quality have dramatically reduced the natural oyster population in U.S. waterways. Aquaculture has taken over where nature left off, and today 95 percent of oysters consumed around the globe are farmed. Fortunately, cultivating the nutrient-rich bivalves has proven to be beneficial not only for restaurants that serve them, but also for oyster growers and the environment.

Oysters naturally improve the environment around them by efficiently filtering out excess nutrients in the water, contributing to better water quality where they grow. Cultivating oysters in trays or plastic net bags raised above the ocean floor provides greater access to free-flowing nutrients, allows them to filter more water, and enables them to grow faster and have different traits than bottom-grown oysters.

Currently, ECSGA estimates that there are about 2,000 small shellfish farms in the U.S. raising oysters. Over the last decade, production at these farms has been increasing by double digits each year.

One of the better-known growers is Rappahannock Oyster Co. in Richmond, Va., a 100-year-old family-run oyster company committed to cultivating and celebrating shellfish of the Chesapeake Bay.

“We got into it out of sheer nostalgia,” said Ryan Croxton, co-owner and great-grandson of company founder James Arthur Croxton, Jr. “The story [was] so cool …there were no downsides.”

As increased oyster aquaculture increases availability, oysters are showing up on more restaurant menus. According to menu research firm Datassential, oysters appear on 3.6 percent more menus now than a year ago.

For chef Chris Lobkovich of Library Bistro and Bookstore Bar in Seattle, who serves about 45 dozen oysters a week in the restaurant or at the bar for happy hour, offering farm-raised oysters is largely a matter of good taste.

“It’s been the only farm-raised seafood I serve because there’s no difference in quality,” said Lobkovich. “When you taste a farm-raised salmon, they simply don’t taste as good.”

A consistently top-notch product is the main attraction for MJ Gimbar of the Black Restaurant Group, whose staff shucks about 15,000 farm-raised oysters each week at the company’s four D.C.-area restaurants that serve them.

“You get a cleaner oyster — tumbled, power washed. You don’t get the gunk, the mud,” said Gimbar. “Meats are plumper, shells are stronger and don’t break. It’s just a better product.”

One downside, at least for diners, may be the premium price. Like any specialty product, popular varieties of cultured oysters, such as the Shigoku Hough serves, wholesale for as much as $1.50 each. Though many cultured oysters can be purchased for under a dollar and often as little as 45 cents each, all are about 20 percent higher than similar, wild-caught oysters, said Rheault.

To convince consumers that the high price of cultivated oysters is worth it, two and a half years ago Croxton and his cousin Travis Croxton opened Merrior, a tasting room on the banks of the Rappahannock River overlooking where the company grows its oysters. Since then, they have also opened Rappahannock Oyster Bar in D.C., and Rappahannock, a farm-to-table concept in Richmond, Va.

“We always wanted to get the word out to consumers about aquaculture, not just chefs,” said Croxton. “[Merrior is] a destination where people [can] go to see our farm, process [and that] it’s okay to spend $1 or $2 for an oyster.”

For Hough, the environmental benefits of sustainable, farm-raised oysters are well worth their high price.

“[Cultivated oysters are] one of the most sustainable ocean products a restaurant can commit to purchasing,” he said. “It’s really crucial that people are paying attention to these things.”