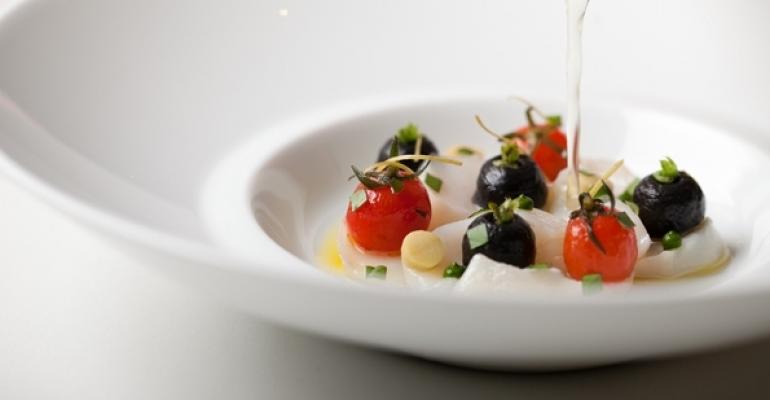 Black bass with black olive, tomato and basil paired with a red wine (not pictured) at L20 in Chicago
News>Casual Dining

Pairing beverages with seafood has traditionally meant white wine. Lately, however, a number of restaurants across the country are breaking with tradition, instead pairing seafood with handcrafted cocktails, microbrews, and even red wine.

“More people are adventurous,” said Aaron McManus, sommelier at L20 in Chicago. “A lot of guests are looking to try something they haven’t had with pairings.”

Two months ago McManus added a red wine to go with a new seafood dish on L20’s tasting menu. The Südtirol Lagrein Heinrich Mayr Nusserhof "Riserva" 2007, a wine that is deep purple in color, is poured with the olive-oil-poached black bass with gordal and kalamata olive purée.

“It’s not exactly a pairing that most people expect is coming,” said McManus. “I get some skeptical looks when I pour [it]. [But] I win 90 to 95 percent of the people over.”

McManus, who has paired seafood with red wine before, says it works in this instance because of the preparation of the dish.

“It calls for the red wine because there’s so much richness,” said McManus. “It is all of the olive preparations in the bowl that provide some richness and earthy elements that are complemented by the wine that truly make this work.”

Craft cocktails, not wine, are the recommended beverages for seafood at Vessel in the Kona Kai Resort and Marina in San Diego, Calif. Earlier this year the restaurant created a unique cocktail for each of the main dishes on its menu.

“Beer lists are fun, but specific to regions. Wines are fun, but the typical diner doesn’t have a broad knowledge of wine and relies on the server to recommend. But a cocktail, they know,” said Robert Ratchford, director of food and beverage and resident mixologist at Vessel.

Among the five seafood pairings on the menu are the Tea Garden Cooler, with gin, lime, basil and cucumber, created to go with the Baked Savory Snapper with whipped potatoes and capers; and the Jalisco Heat, with tequila, muddled cucumber and jalapeño, fresh lime juice and homemade simple syrup, concocted for the Seared Rare Tuna served on top of Asian stir fry topped with homemade ponzu soy sauce.

Since adding them to the menu in July, sales of the new cocktails have exceeded expectations.

“Our customers have been so well receiving it of it,” said Ratchford. “We’ve been selling a lot more of these craft cocktails than we thought we would.”

Maison Premiere in Brooklyn, N.Y., just began pouring Oyster Stout, a proprietary beer made with oyster shells and designed to accompany the restaurant’s menu of more than 30 different types of oysters. The beer is made in partnership with Barrier Brewing Co. and is exclusive to Maison Premiere.

Typically, diners don’t order stouts with oysters because they perceive it to be too heavy. But Zizka says since they started pouring the Oyster Stout two weeks ago the exclusive brew has inspired a lot of trial.

Other restaurants offering alternative beverage pairings include Apartment 13 in New York City, where the oyster pairing menu features a flight of four oysters and two clams matched with a variety of beverages, including daiquiris and martinis, microbrew beers, and flights of tequila, sake and sherry.

“Fish in the past has been a delicate thing, simply prepared. Now, there’s a lot of flavor,” said Noveshen. “Beer and cocktails with a lot of layers can really compliment the bold flavors that people are serving with fish.”

While there aren’t any specific beverage pairings at Pacific Catch, the menu features cocktails, beer and wine all purposefully chosen to match the fish house’s Pacific-centric food that features bold Mexican, Asian and California flavors.

“A margarita with fish tacos? It just feels right,” he said.

Correction: October 21, 2013 This story has been updated with Aaron Noveshen's correct title.