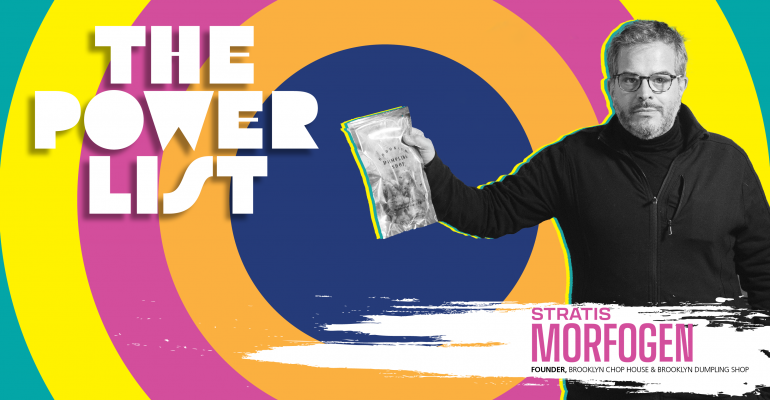 New York restaurateur Stratis Morfogen started to offer his own multicultural dumplings — Chinese style, but stuffed with matzoh ball soup, salami and provolone, gyros etc. — at Brooklyn Chop House, a restaurant in Manhattan across the Brooklyn Bridge from its namesake borough.
News>People

Meet the man bringing automats back into style

Stuffed dough has nearly universal appeal, whether you call it dumpling, empanada, pierogi or, as Stratis Morfogen likes to say, a 2-ounce sandwich.

The New York restaurateur started to offer his own multicultural dumplings — Chinese style, but stuffed with matzoh ball soup, salami and provolone, gyros etc. — at Brooklyn Chop House, a restaurant in Manhattan across the Brooklyn Bridge from its namesake borough.

The restaurant is named for the Irish chop houses that originated in Brooklyn in the 19th century. Similar to steakhouses, they offered pork and lamb chops, shrimp cocktail, creamed spinach and more. Morfogen added his dumplings to the mix, and they were a huge hit, with sales often amounting to more than 400 dumplings a day.

At the end of 2019, Morfogen was reading up on the automat, a concept he said emerged after the 1918 Spanish flu pandemic and remained successful into the 1970s, when it succumbed to competition from fast-food restaurants.

Automats were contactless even before that was a term. They were vending machines that were continuously replenished with food that customers would buy by putting coins into the machines’ slots.

Morfogen envisioned creating an automat that made use of modern technology. People could order via kiosks or from their own phones, and orders would be quickly prepared and placed in appropriately heated or refrigerated compartments for guests to retrieve.

He worked with electronics company Panasonic to develop automats that could be controlled by smartphones, and a prototype was ready in January 2020.

Of course, the pandemic got in the way of plans to build the concept, but the technology started to get media attention, and in October 2020 Morfogen was contacted via LinkedIn by Dan Rowe, CEO of Fransmart, who said he was interested in franchising the concept even though it hadn’t opened a single unit yet.

He wasn’t alone. Morfogen said he had received 55 franchise inquiries by the end of 2020.

Finally, in May 2021, the first and still only Brooklyn Dumpling Shop, a corporate unit, opened in New York City’s East Village.

That’s in Manhattan, but Morfogen said the name “Brooklyn” has more universal appeal.

“Brooklyn is hip, trendy and resonates,” he said.

His modern automat is a hit, serving 400-500 people a day with three to four employees per shift, including a greeter who explains to guests how to order.

An order of four dumplings ranges from $5.95 for mac and cheese or pepperoni pizza dumplings to $9.95 for Maryland crab cake dumplings. Smaller potstickers, in flavors such as kung pao chicken and kale and veggie, come in orders of five for $5.

Other flavors include Reuben, chicken parm, and Buffalo ranch chicken. There is also a range of vegan gluten-free dumplings (“It’s pretty much the same market,” Morfogen said) made with jackfruit as a substitute for chicken.

The second dumpling shop, and its first franchise, is slated to open at the University of Connecticut in Storrs, Conn., on Jan. 15, followed in roughly three-week intervals with openings in Hoboken, N.J.; Atlanta; Miami; Orlando, Fla., and elsewhere, including one actually in Brooklyn slated for later in the year.

Those new locations include two units boasting the natural next evolution for Brooklyn Dumpling Shop: drive thru, using the same automat technology.