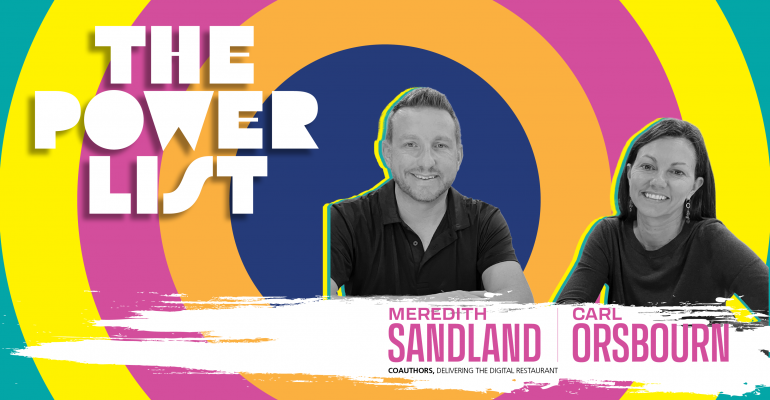 In the book, Delivering the Digital Restaurant, Meredith Sandland and Carl Orsbourn describe in detail all of the ways that technology is disrupting the restaurant industry
News>People

A blueprint for navigating the restaurant industry’s digital evolution

The last two years have been perhaps the most tumultuous in the history of the restaurant industry, but that may be just the beginning, as consumers’ embrace of digital technology will continue to drive massive changes going forward. So said Meredith Sandland, a former Taco Bell and Kitchen United executive who co-wrote a comprehensive and influential book on the topic with Carl Orsbourn, also a veteran of ghost-kitchen operator Kitchen United.

“I think there's still a lot more change yet to come,” Sandland said.

In the book, Delivering the Digital Restaurant, Sandland and Orsbourn describe in detail all of the ways that technology is disrupting the restaurant industry, including growing consumer expectations around digital ordering and delivery.

Today’s inflationary environment is only accelerating the pressure on the industry to evolve, said Sandland, who noted that price pressures have contributed to disruption in other industries.

“When you combine that with new business models, new ways of thinking, and new technologies, you can see a fundamentally different type of restaurant serving consumers in a very different way going forward, where they’re actually able to do so more cheaply and possibly with much higher food quality, reinvesting a lot more of the consumer dollar in food,” she said.

Other transformational shifts in the industry, such as the emergence of the casual-dining segment as an alternative to fine dining, and then of fast-casual restaurants as an alternative to casual dining, have transpired because operators found a way to deliver quality at a better price, Sandland said. The same kind of transformation could be happening now as the industry seeks to adapt to a new operating environment driven by digital access and the expectations that brings.

“When we find whatever model it might be that's able to take all the innovations and ghost kitchens and virtual brands and automation and software, and combine those into a new business model that enables that business model to deliver food to consumers at an even lower price, I think you're going to see very quick uptake of that idea,” she said.

Orsbourn, who became a delivery driver for DoorDash as part of his research for the book, said restaurants will need to embrace delivery drivers as though they were servers in their brick-and-mortar locations.

“In a way, it’s about how do you help make drivers feel that they are a part of the system, and how do you create a system whereby you help them feel good about what they’re doing,” he said.

Operators will need to continue to experiment with different solutions in order to succeed in this new environment, said Orsbourn.

He also said he is bullish on the prospects for virtual brands because of their potential to bring niche concepts to market without the expense of creating brick-and-mortar locations.

Both Orsbourn and Sandland also said they expect that on-premises dining will remain important to consumers and will evolve to become even more experiential.

“As you have more restaurants go toward this ‘delco’ delivery/carryout model, and some restaurants bifurcate and go the other way toward more dine-in, we talk about in the book seeing a much more sophisticated dine-in experience,” said Sandland. “Because if you’re going to go out, it should be awesome.”