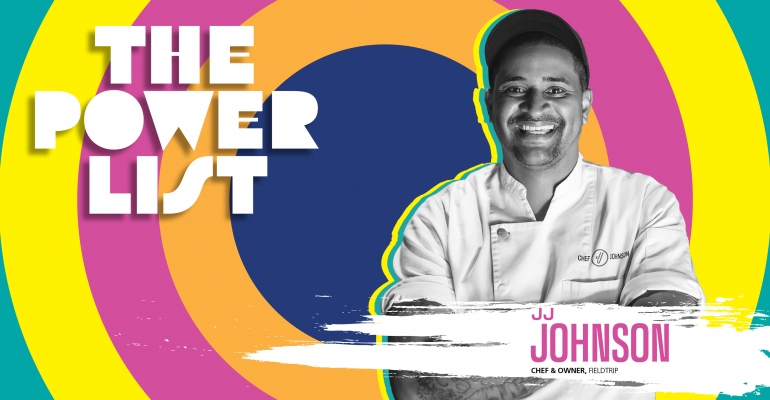 The FieldTrip menu boasts bowls between $8 and $13 featuring a variety of rice types and proteins like fried chicken, BBQ brisket and salmon.
News>People

Chef JJ Johnson believes rice is a universal ingredient that unites everyone, reaching across financial divides and building community. That idea is the driving force behind his three-unit, New York City-based concept FieldTrip, which not only aims to serve wholesome, affordable food, but also to serve communities that don’t have access to such things.

The FieldTrip menu boasts bowls between $8 and $13 featuring a variety of rice types and proteins like fried chicken, BBQ brisket and salmon. The first location opened in New York’s Harlem neighborhood, as Johnson imagines going into more low-income neighborhoods and serving those underserved communities with accessible, delicious food. That’s one of the reasons he opened FieldTrip as a fast-casual restaurant.

“That dollar that somebody spends, they have to trust you that it actually is going somewhere,” he said of how small businesses put money back into the local economy. “Hopefully people see that with us and feeding [our] communities.”

As Johnson is a James Beard Award winning chef, the menu boasts chef-crafted bowls. But he pared back the menu into something scalable and efficient so he could hit the right price point. After all, nobody was going to pay $25 for a rice bowl, he said.

Of launching the concept in Harlem, Johnson said, “Let's put it in a community where people know who I am, where I have family, so people trust me, and [use] an ingredient that connects us all.”

Since the first unit opened in 2019, Johnson has been able to expand with the help of his community and private investors who believe in the vision of the restaurant and him. But late last year he received an undisclosed amount of money from an investment group.

Johnson was already creating an investor deck when he was approached by Nick Marsh, CEO of Founders Table Restaurant Group, which counts Chopt and Dos Toros among its investments. That led to the pair collaborating on a Series A funding that FieldTrip received in December.

This wasn’t the first cash influx Johnson had been offered. Johnson had previously been approached by an unnamed rapper who wanted massive and quick expansion, something Johnson wasn’t ready for at the time.

But now he feels it’s the right time. The undisclosed amount in the Series A will help FieldTrip expand to 10 locations over the next five years.

“People say hard work pays off, or the good guy gets the money. In this instance, I felt like it was true, like [the] American dream was happening … and now I can pave the way,” said Johnson.