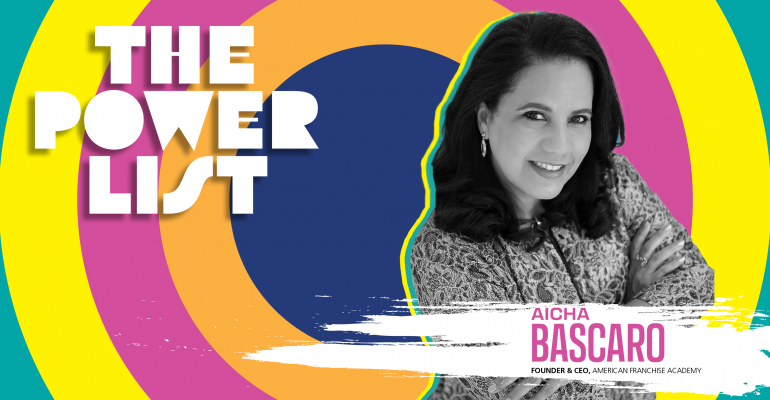 The founder of the American Franchise Academy fosters networking and mentorship

Franchising expert Aicha Bascaro is on a mission to help small franchisees succeed.

A veteran of Domino’s Pizza, where she started as an assistant manager and worked her way up to becoming the chain’s master franchisee for the Bahamas, Bascaro went on to oversee regional operations for that chain in Atlanta, followed by operational roles at Popeyes Louisiana Kitchen and Olive Garden. She then worked as brand vice president for Pretzelmaker before founding the American Franchise Academy five years ago.

“I realized a huge gap in knowledge of franchise entrepreneurs, people who decided they’re going to invest in a franchise thinking they were going to get everything they need to be successful [from the franchisor], only to find out that what you’re getting when you buy a franchise is the brand systems — the product, the service, the image, regional and national marketing,” she said. “They don’t give you a business degree in franchise management.”

After a couple of weeks of orientation and support at the opening of your first restaurant, you’re mostly on your own after that, Bascaro said.

There are reasons for that, she added. Training is an added expense that franchisors would have to charge for. Also, there are liability issues if a franchisor gets too involved with the operations of their franchisees and they end up being designated as joint employers.

Regardless, it still means that franchisees have a lot to learn that no one’s teaching them.

“There’s a need here, and I love being able to provide that information,” Bascaro said.

She wrote a book, The Franchise Fix, that includes the systems that franchisees, and other restaurant operators for that matter, need to understand, and she also established the American Franchise Academy.

Along with giving operators the tools to succeed, the academy also hosts “masterminding discussions” in which franchisees share problems and discuss issues, guided by experienced coaches, thus creating a longstanding support network.

One particular need for both franchisors and franchisees at the moment is to expand from single-unit to multiunit operations.

Bascaro said that the pandemic has brought many families closer together. As their lives contracted, many of them began working in the family business, but for that to work — for everyone to earn a decent living — they need multiple restaurants, providing the impetus for them to expand. And for franchisors, not only is it easier to manage one multiunit franchisee than multiple single-unit operators, but also multiunit operators think differently.

Single-unit franchisees “are more tactical in their thinking than strategic. They’re working in the business rather than on the business,” Bascaro said. Franchisors want operators with bigger strategic pictures who can help grow the business as a whole, she said.

She launched a program for district managers, the first class of which has already sold out.

Bascaro also has partnered with the Multicultural Foodservice and Hospitality Alliance’s (MFHA) Pathways to Black Franchise Ownership program. She said that many Black and immigrant restaurateurs aren’t aware of the resources that are available to them.

“Many of them don’t even know what it means to be a franchisee,” she said. “They don’t know how to become one or how to access capital. They don’t have the management skills, and they know it, and that stops them from even attempting it.”

Bascaro is working with the MFHA to find people who are seeking that knowledge, partnering them with franchisors who want to teach them and also getting them access to capital.

“But that’s not enough,” she said. They also need to know how to run and expand the business.

“That’s where the Academy comes in.”