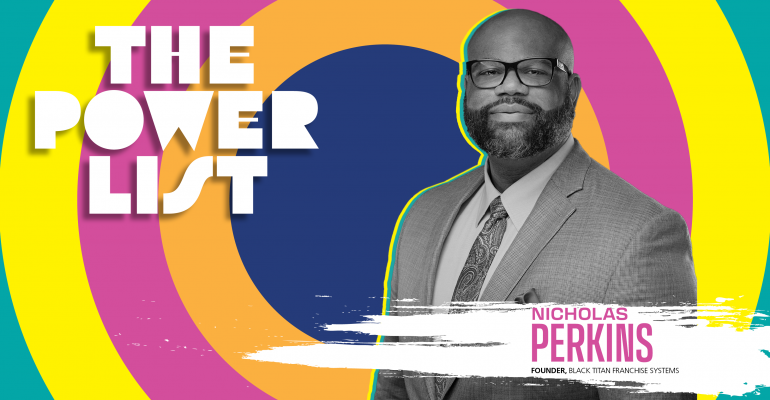 Going forward, Nicholas Perkins hopes to leverage Fuddruckers’ core identity as a pioneer in the gourmet burger space that offers the added benefits of customization.
News>People

How a franchisee is resurrecting this burger icon

Nicholas Perkins sees tremendous potential for growth in the Fuddruckers brand, but before that happens, he needs to make sure the concept has its house in order.

Perkins is a longtime Fuddruckers franchisee and founder of Black Titan Franchise Systems, which acquired the Fuddruckers concept from Luby’s in 2021. Going forward, he hopes to leverage Fuddruckers’ core identity as a pioneer in the gourmet burger space that offers the added benefits of customization.

While the company is focused in the near-term on shoring up its supply chain and resolving issues related to the labor crunch, it is also looking ahead to several initiatives to bolster its operations and its menu, including its first plant-based meat alternatives.

“We have a ton of menu innovations that we're going to be rolling out and testing in select markets,” Perkins said.

The company is also looking at making improvements to its dessert offerings and incorporating other menu enhancements.

In addition, Perkins said Fuddruckers will open in some ghost-kitchen locations in Texas, and it plans to expand its partnerships with third-party delivery platforms.

Growth in noncommercial locations, specifically colleges and universities, is also on the table. Fuddruckers has worked with several college and university campuses in Texas, as well as with Benedict College in South Carolina, which is the first historically Black college with a nontraditional Fuddruckers location. Plans call for additional on-campus Fuddruckers locations at Livingstone College in Salisbury, N.C., and the University of the District of Columbia.

Although Perkins said Fuddruckers has received many requests from potential franchisees seeking to expand the concept, the company first has to resolve some basic operational challenges.

“Growing prematurely, in my opinion, is as risky, if not riskier, than not growing at all,” he said. “What is most important right now is stabilizing our workforce and stabilizing our supply chain and improving upon our efficiencies.”

By the fourth quarter of 2022, however, Perkins said he hopes that the chain will resume the process of opening new locations with franchisees.

A core focus for Fuddruckers moving forward will be highlighting the brand’s “Create Your Crave” positioning that revolves around the ability of customers to personalize their burgers, which Perkins described as Fuddruckers’ “most valuable and unique selling point.”

That involves not only the ability to select the bun, the type and size of burger and the temperature to which it is cooked, but also the ability to customize it with items from the self-service toppings bar. Fuddruckers is also known for its scratch preparation and quality ingredients, which includes buns and desserts baked fresh in the restaurant each day, Perkins said.

Having been a franchisee gives Perkins insights around what makes the concept resonate with consumers as well as with franchise operators, he said.

“That was one of my most unique selling points to the existing franchise community, that I saw through the same lens that they did,” said Perkins, noting that most of the innovations at Fuddruckers have come from its franchisees.