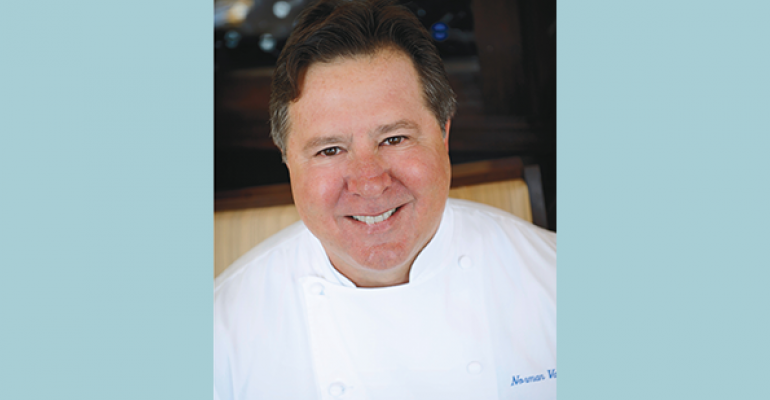 Chef Norman Van Aken is originally from the Midwest, but it was in Florida that he discovered his passion for cooking and staked his culinary claim. He is best known as one of the founding fathers of “Floribbean” or New World cuisine, an elevated mixture of local cuisines and ingredients that evolved partly into what is known as fusion cuisine. He is also known for his eponymous restaurant, Norman’s — originally in Coral Gables, Fla., and now at The Ritz-Carlton Orlando, Grande Lakes — which showcases this unique fare.

Van Aken continues to blaze new culinary trails. Up next is 1921 by Norman Van Aken, a restaurant focused on modern Florida cooking to be opened in June in Mount Dora, Fla. In Miami this fall Van Aken is slated to open a hands-on culinary classroom for amateurs called In the Kitchen with Norman Van Aken at the Wynwood Arcade, and an adjacent restaurant.

How has food and dining evolved over the years?

The world that existed when I began entering a kitchen at 13 in a Holiday Inn in the Northern suburbs of Chicago … nobody would have thought food would have reached the notoriety [it has today]. I came along in the old bad days when cooks were beaten down old men … didn’t feel that mission and life. There were extraordinary leading lights … [Jacques] Pépin, [Paul] Prudhomme … [Now] it’s over glamorized in some ways. I got to see both sides of it. I got to be Off Off Off Broadway in Key West and learning my trade without the expectation of being in a magazine [or on TV]. It gave me a chance to be more loose, spend more time figuring out what was valuable to me.

With Norman’s in Orlando it’s Norman’s Greatest Hits. [1921] will be a departure for me. A little less urban, Latin, Caribbean. This is the totality of the state. The palate is more Southern. There’s not going to be Seminole stew: [I’m] not interested in being a food historian. I’m interested in making the best food I can.

Like any powerful term, there is plenty of misinterpretation as well as correct interpretation. If it’s really done correctly, it’s very reverential. If done incorrectly, it can be shorthand for disaster. I’m not saying I created the way to cook this way. I came up with the word.

What inspired you to open a cooking school?

People haven’t continued to learn to cook. We’ve lost the family unit where grandma taught or mom taught. What more important thing can we do for each other then to take care of each other through food?

Update: April 22, 2016 This story has been updated to reflect the new location for Norman Van Aken's cooking school.