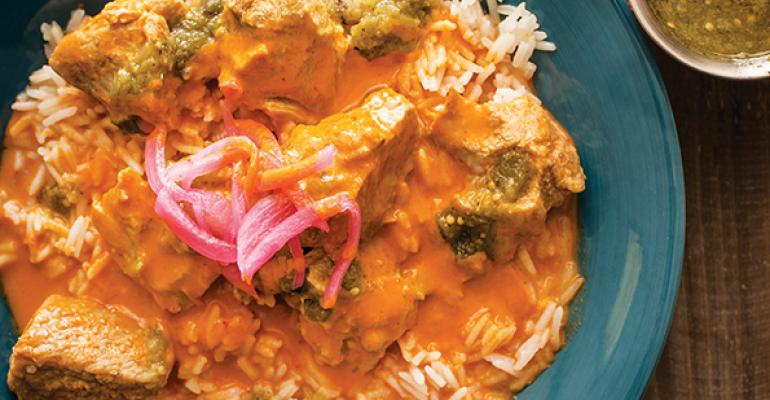 The team at Sodexo Culinary Solutions recently noticed something about Mexican cuisine: It was everywhere. So getting customers excited about its Salsa Rico menu of burritos, tacos and quesadillas was challenging.

“We did some research and consumer insights around the program and found that it was a heavily saturated market with national brands, as well as internal Sodexo-run burrito-type brands,” said Jennifer Schmalz, director of brand management for Sodexo Culinary Solutions. “We found that consumers were looking for quality, experience and authenticity, and we wanted to take it beyond Mexican.”

Sodexo reached out to celebrity chef Roberto Santibañez and drew from the expertise of its own chefs throughout North America to develop Crisol Latin Kitchen.

Crisol, which is Spanish for “melting pot,” features food from throughout Latin America. 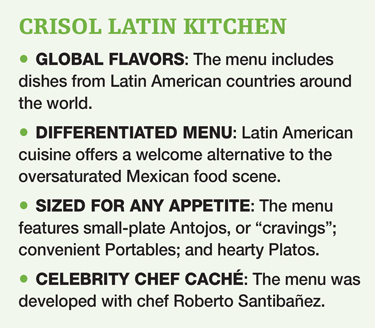 ​The menu is divided into three sections: small-plate Antojos, or “cravings” in Spanish; Portables, such as Cubano sandwiches and Mexican hot dogs with spicy cabbage, avocado, pickled red onion, cilantro mayonnaise and mustard; and substantial Platos.

Although burritos have been eliminated, “We kept our tacos,” Schmalz said.
The menu was introduced in August 2015 at Stony Brook University in New York, and five more schools are slated to introduce it in the next school year.

“It’s very well received by the students,” Schmalz said, noting that the program is also being considered at other venues, including business and industry, healthcare and government.