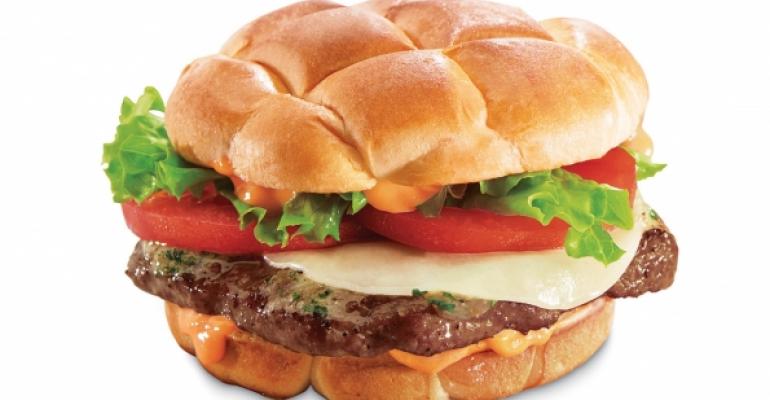 How do you revitalize a legacy quick-service brand? Improve the food.

That’s what 2,250-unit Jack in the Box did with its Classic Buttery Jack. The San Diego-based chain moved away from its seasoned beef and brought in a new quarter-pound patty of 100-percent beef that it seasoned by melting garlic-herb butter on top. Then it got rid of its sesame seed bun and replaced it with a new one that’s toasted and dressed with a buttery spread. The sandwich is rounded out with creamy tomato sauce, green leaf lettuce, tomatoes and provolone cheese.

Jeff Zwally, Jack in the Box’s vice president of culinary development, said the process started in January 2013 and the development team tried more than 150 combinations and builds.

The Classic Buttery Jack was introduced as a permanent item in January, along with the Bacon & Swiss Buttery Jack dressed in bacon mayonnaise, hickory smoked bacon and Swiss cheese. 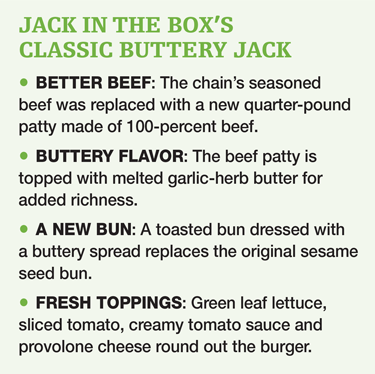 Management at Jack in the Box Inc. declared it the most successful product launch in recent memory, and credited it, in part, with the 8.9 percent increase in systemwide sales during the second quarter of 2015.

Jack in the Box followed that up with a limited-time-offer based on the Classic Buttery Jack. The Portobello Mushroom Buttery Jack, offered from July through September, was topped with portobello mushrooms, peppercorn mayonnaise, grilled onions and Swiss cheese, along with the melted garlic-herb butter.

Seeing that customers responded to the ingredient changes, Jack in the Box then rolled out Buttery Jack’s new buns, lettuce and tomatoes that it introduced in the Buttery Jack to its other burgers, and swapped out its mayo onion sauce for real mayonnaise.

Correction: April 18, 2016 An earlier version of this article misstated the order in which new versions of the Buttery Jack were introduced and when the ingredient upgrades were extended to other burgers. As a result, the roll out did not impact sales in the third quarter of 2015.