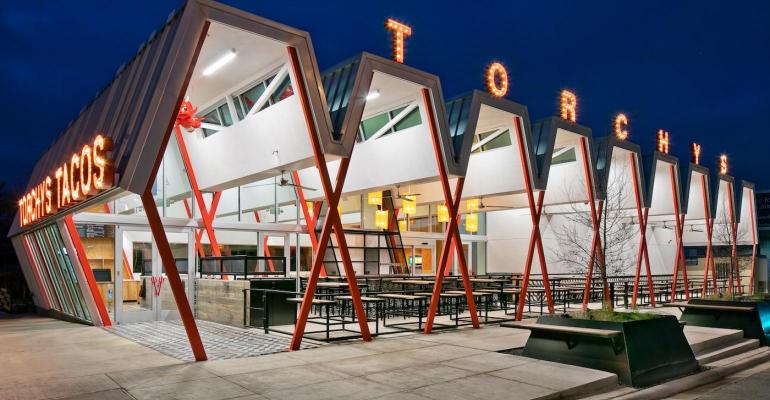 The next restaurant chain to go public may be the fast-casual Torchy’s Tacos.
News>Fast Casual

Torchy’s Tacos is reportedly preparing for IPO this year

The next restaurant chain to go public may be the fast-casual Torchy’s Tacos.

Bloomberg reported last week that the Austin, Texas-based fast-casual chain has hired Morgan Stanley and Bank of America Corp. to explore a proposed initial public offering this year. The report indicated Torchy’s could raise an estimated $300 million and have a valuation of about $1 billion.

Company officials did not immediately respond to requests for comment.

If the IPO comes to fruition, the 83-unit Torchy’s will join a small handful of chains to take the traditional going-public route in recent years, including Muscle Maker Grill, Kura Sushi and multichain operator FAT Brands. Both Blaze Pizza and MOD Pizza have also been rumored for some time to be readying for public offering.

For some, the road to the public markets will more likely come from a recent crop of special purpose acquisition companies, or SPACs, which are shopping for restaurant brands. Last year, BurgerFi was taken public as it was acquired by a blank-check company called Opes Acquisition Corp.

Several more SPACs formed by restaurant industry veterans from brands such as Barcelona and Bartaco, Jamba Juice, &Pizza — and even multiconcept operator Danny Meyer of Union Square Hospitality Group  — are currently on the hunt looking for potential targets in foodservice.

On Monday, for example, FAST Acquisition Corp. II, a third SPAC led by Doug Jacob, co-founder of &Pizza and Sandy Beall, founder of Ruby Tuesday, announced pricing of a $200 million IPO, offering 20 million units at $10 per unit, with sights set on restaurants.

Torchy’s, meanwhile, in November announced it had sold a $400 million stake in the company to a group of investors that included D1 Capital Partners, T. Rowe Price, Lone Pine Capital and XN, who joined existing investor General Atlantic.

The goal at the time was to accelerate growth into as many as 10 new states over the next four years, said G.J. Hart, Torchy’s CEO. The chain added 12 new locations in 2020, moving into three new states, despite the challenges of the pandemic.

At the time, Torchy’s units could be found in Arkansas, Colorado, Kansas, Louisiana, Missouri, Oklahoma and Texas. On its website, the chain lists “coming soon” locations in Memphis, Tenn., and Raleigh, N.C.

Torchy’s was born in 2006 as a food trailer in Austin. Now with locations showing average unit volumes of about $3.8 million, the concept has become known for its cheeky marketing of “damn good tacos” and margaritas, with rotating Tacos of the Month.

For March, the Taco of the Month is the Roscoe: a sweet-and-savory fried chicken and waffle taco with bacon and a fried egg, drizzled with maple syrup. The recommended drink pairing is a Sangria Swirl.