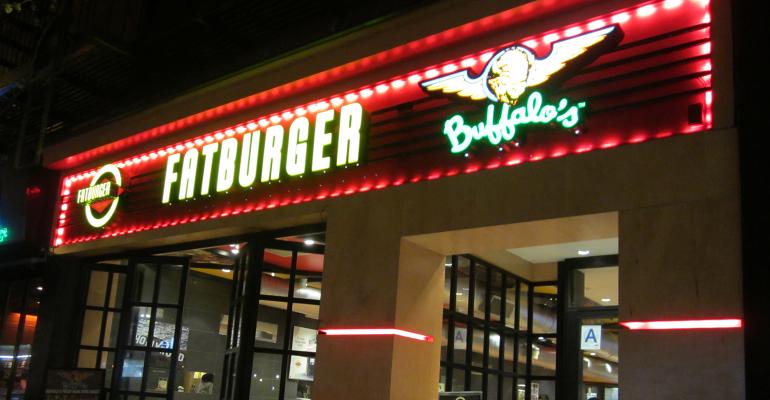 The company sold 2 million shares at $12 a share and began trading on the Nasdaq Stock Exchange. The stock was up more than 16 percent at one point but closed down more than 5 percent.

Still, the IPO gives the Los Angeles-based company a $120 million valuation, and will help Fat Brands pay for its recent acquisition of the Ponderosa and Bonanza restaurant chains as well as future acquisitions.

“Investors were excited about it,” CEO Andy Wiederhorn said in an interview. “It’s a profitable, growing business. All of those things were positive.”

Fatburger’s “mini-IPO,” as such offerings are often called, did not come easy. Wiederhorn said the company encountered a number of roadblocks from institutional investors and investment bankers worried about Wiederhorn’s own history.

“This was all about persistence and perseverance,” Wiederhorn said in an interview. “I had a lot of doors slammed in my face.”

That history includes 15 months spent in federal prison after Wiederhorn pleaded guilty in 2004 to filing a false tax return and for paying an illegal gratuity to a business associate. Those were in association with a previous company, Wilshire Credit.

“I’ve always adamantly maintained I never did anything deliberately wrong,” said Wiederhorn. “But that was the post-Enron era and the edict was to prosecute anyone. I chose to settle it. But by settling it, you have this cloud following you saying, ‘We don’t want to touch the deal.’”

Enron was a Houston energy giant that collapsed in 2001 following an accounting scandal that also engulfed its accounting firm, Arthur Andersen, which also dissolved.

Wiederhorn’s past wasn’t the only problem. He said the company was planning a more conventional IPO before its investment banker collapsed. That led Fatburger to Regulation A+, which enables companies to raise as much as $50 million by advertising the offering to customers and other fans of the brand.

As such, the rules are more relaxed than they are with conventional IPOs, which these days are dominated by institutional investors and frequently leave out smaller companies.

Wiederhorn said the regulatory process ultimately proved to be “a breath of fresh air.”

He also said the company’s business made the case for him. Fat Brands franchises more than 300 locations, including Fatburger, Ponderosa, Bonanza and a chicken wing chain Buffalo’s Café and Buffalo’s Express.

“We’re very profitable,” Wiederhorn said. “And unlike many [mini]-IPOs, we’re not a startup.”

Wiederhorn said Fat Brands sold stock to many customers and fans, with a $600 minimum order. The company’s IPO generated a lot of attention on social media and it used a marketing service to advertise the offering to crowdfunding interested investors.

Still, he believes the company would have been worked as a conventional IPO — but for the modern era.

Investment bankers only want the largest potential IPOs these days, and are ignoring many of the smaller companies eager to raise funds. “There are not going to be a lot of $200 million IPOs,” he said. “The bigger deals are all done and the smaller deals are too small for the conventional IPO.”

As such, he said, smaller deals will go the Regulation A+ route.