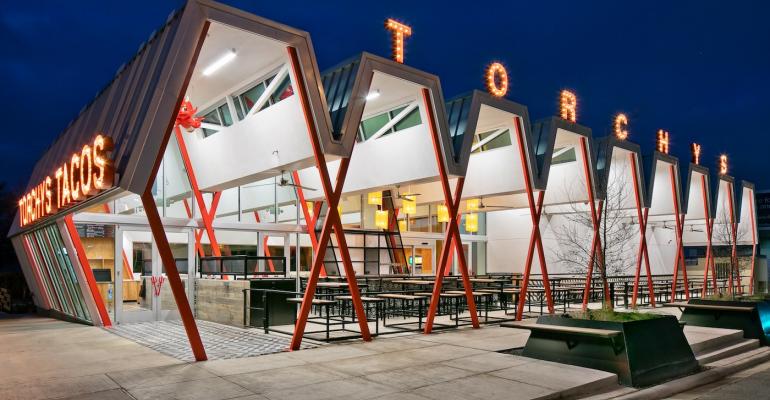 Torchy's Tacos
Austin, Texas-based Torchy’s Tacos said it plans to use the investment to expand into 10 additional states by 2024.
News>Fast Casual

Torchy’s Tacos has sold a $400 million stake in the company to a new group of investors, the company said Friday.

The Austin, Texas-based taco brand said General Atlantic, a global growth equity firm that initially invested in 2017, would be joined in the ownership group by D1 Capital Partners, T. Rowe Price, Lone Pine Capital and XN in the new funding round, which will be used to expand the 83-unit fast-casual brand.

Related: Torchy’s Tacos CEO GJ Hart on a return to innovation and resiliency

A company spokesperson said the deal was valued at “about $400 million.”

“Pairing these four firms with our existing partner, General Atlantic, we feel that we have assembled a premier ownership group that will allow us to accelerate our growth and write the next chapter in Torchy’s history,” said G.J. Hart, CEO of Torchy’s Tacos, in a statement.

Torchy’s founder Michael Rypka and members of the original ownership group will reinvest as individuals, the company added.

“All of us at Torchy’s are incredibly grateful to Mike and the original ownership group that built this amazing brand over the past 14 years, and we are thrilled that they will all remain a part of the ownership group as individuals,” Hart said.

Founded as a food trailer in Austin in 2006, Torchy’s Tacos has become a “craft casual” brand that offers tacos, queso and margaritas. The brand has average unit volumes of about $3.8 million, the company said.

Despite the challenges of the COVID-19 pandemic, Torchy’s opened 12 new locations this year and expanded the brand to three additional states, bringing the total to seven.

Andrew Crawford, chairman of Torchy’s and global head of consumer at General Atlantic, said, “Since our initial investment in 2017, Torchy’s has demonstrated the strength of its brand as it has successfully captured impressive unit growth.”

The company said it would use the new investment to expand into as many as 10 additional states over the next four years.

In this investment, North Point Advisors Inc. and BofA Securities acted as placement agents on the transaction.