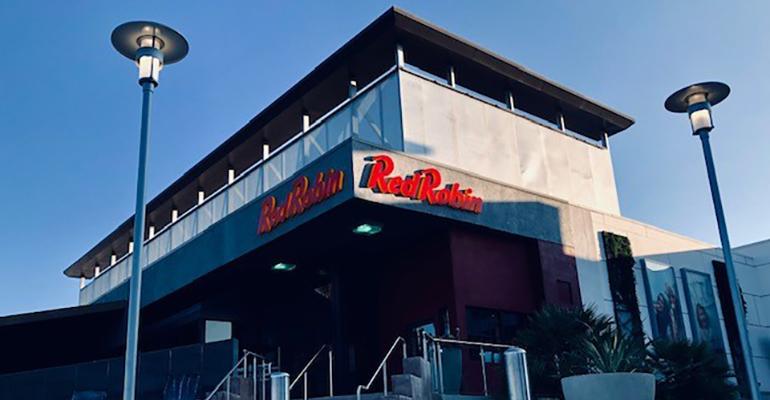 Why Red Robin is under siege

A series of missteps have led to erosion of shareholder value, analysts say

At a January 2018 investor conference, Red Robin Gourmet Burgers Inc. said it planned to combat rising minimum wage costs by eliminating the roles of busboys and expeditors at restaurants.

The job cuts would save millions and require servers to wipe clean tables. It was a stark contrast to the brand’s unbridled service ethos, where employees had been taught to go above and beyond to please diners.

Industry watchers shook their heads at the cost-cutting maneuver.

“It was just atrocious,” said John Gordon, an analyst at Pacific Management Consulting Group. “We knew that was going to screw up the customer flow and throughput. And, sure enough, it did.”

The cuts and other missteps along the way did not improve shareholder value for the Greenwood Village, Colo.-based casual-dining brand. On Friday morning, Red Robin’s stock was trading at about $31 a share, down from $55 in early January 2018. Impacts from the on-demand economy, along with unsteady leadership and depleting traffic at mall locations, have led to unrest at the casual-dining chain.

Company leaders are being challenged by activist investor Vintage Capital Management LLC, which in early June called for an auction and said it would buy Red Robin at $40 a share. The private-equity firm also called for a special shareholder meeting to remove five board members and replace them with ones who would favor of a sale.

“They are definitely in turmoil,” said David Hopkins, president of The Fifteen Group Inc., a Toronto-based hospitality consultancy firm. 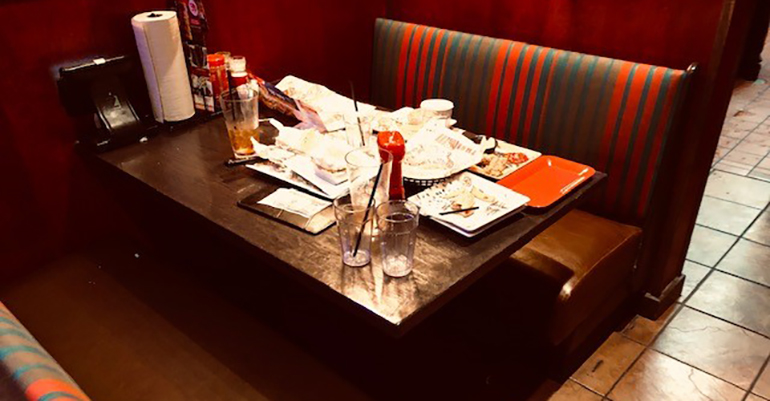 In 2018, Red Robin eliminated bussers, leaving servers to clear tables. Dishes and glasses left by diners who’d completed their meal, shown, remain at a table before a server or host had time to clear out at a restaurant in Orange, Calif.

Vintage, which has said it owns 11.5% of Red Robin's shares, could not be reached for comment.

Red Robin, in a statement sent to Nation’s Restaurant News, said the company has expressed “openness” to work “constructively together” with Vintage. That includes discussions “on our ongoing search to identify a world-class CEO.”

Board chair Pattye Moore took over as interim CEO when president and chief executive Denny Marie Post announced her sudden retirement in April. Post had been CEO since late 2016.  The decision came after discussions with the board of directors.

Though Red Robin denied Vintage’s meeting request, the company said it would still consider a special shareholder meeting once the firm “fixes the two deficiencies in its request.”

In the meantime, Red Robin said it is “focused on executing our strategic plan to drive growth and shareholder value, and we remain open to all opportunities that would advance these objectives.”

Analyst Mark Kalinowski said it common for corporate leaders to push back when being challenged by activist shareholders.

“When an activist gets involved, it's typically because they want to do things to some degree that is different than what a management wants to do,” said Kalinowski of Kalinowski Equity Research.

While it’s still early, the Vintage-Red Robin faceoff is reminiscent of the 2014 battle between Starboard Value L.P. and Darden Restaurants Inc., he said. Starboard was able to unseat all 12 Darden board members in an proxy battle.

“It was a shocking outcome,” Kalinowski said. “It showed that activists, at times, can certainly have a very meaningful voice.”

‘Weak for a period of time’

Consultants Gordon and Hopkins said Vintage’s concerns are not surprising given that Red Robin has been trying to reverse declining customer traffic and sales for years.

Except for fiscal year 2017, same-store sales at Red Robin have been down every year since 2015.

“Red Robin had been weak for a period of time,” Gordon said.

Still, Hopkins said Vintage must see some sign of hope, since the activist investor is looking to buy the chain well above the current share price.

“They clearly have a different plan or see a great opportunity that is being missed,” Hopkins said.

A tale of two CEOs

During that time, the company was led by two CEOs: Post and Steve Carley. 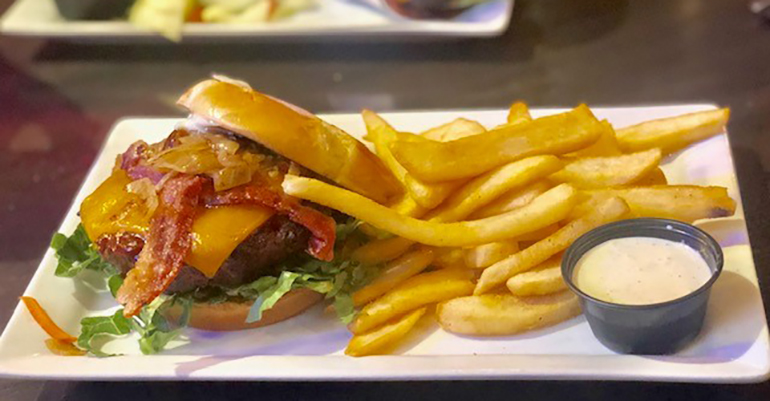 Carley had led a brand revamp that included the development of a barbell menu strategy focused on value and premium burgers. The menu featured a few lower-priced Tavern Burgers and more than 20 gourmet burgers made with premium ingredients and select bottomless sides and drinks.

Post, a 2018 NRN Golden Chain winner, was known for what she called “best in class” employee retention.

During her tenure, the company produced a 94% retention rate, strong for the restaurant industry, and managerial turnover of 26%.

But her reign was also marked by controversial labor cuts.

In late 2017, the company eliminated expeditor jobs to save $8 million a year. At the ICR conference in 2018, Guy Constant, then the company’s chief financial officer, told investors that Red Robin would continue cutting roles with the elimination of bussers. Those cuts would result in similar savings, he told investors.

“We need to do that in order to address the labor increases that we're seeing that we need to address in order to make sure that we can drive margin improvement in our business,” Constant said. 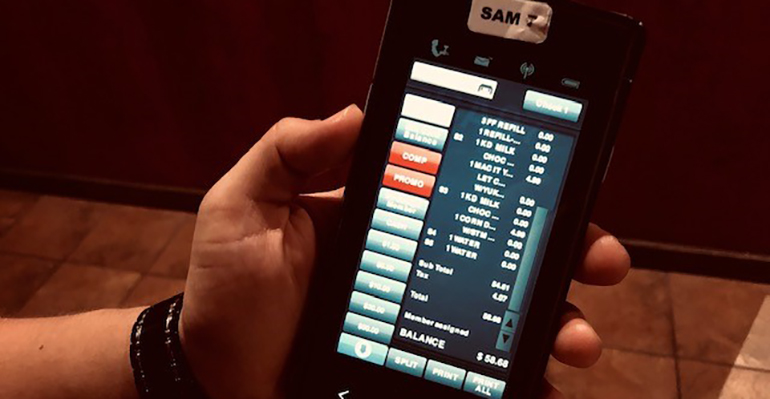 Servers at Red Robin restaurants are starting to use hand-held devices, shown, to take orders. The rollout of the devices should be complete by August.

Several months later in November, then-CEO Post said servers were being “trained on the basics of greeting, one-stop ordering and three-level bussing.”

At a Red Robin restaurant in Orange, Calif., this week, multitasking servers hustled about the mall-based location taking orders with cell phone-size hand-held devices, clearing out tables and handing out bottomless sides like steak fries to guests. Tables vacated by exiting diners were left with dishes and glasses for long periods of time before a server or host could clear the table. One busser was spotted during the peak dinner hour.

When asked how the consolidation of key kitchen and dining room tasks have impacted dine-in consumers over the past year, Red Robin deflected -- only reiterating its current strategies.

The company, for example, said it is investing in more tools for servers to care for more guests in a timely manner such as equipping them with hand-held ordering devices. The rollout is scheduled for completion in August.

“We are focused on enhancing the customer experience, significantly improving cash flow and increasing profitability, and we are confident our initiatives will steadily improve our financial and operational performance,” the company told NRN in a statement.

The brand is also experimenting with pizza.

Recently, some Red Robin locations began selling eight types of Donatos Pizza for delivery and dine-in, according to the company’s website. Representatives for Red Robin and Columbus, Ohio-based Donatos declined to comment on the partnership. 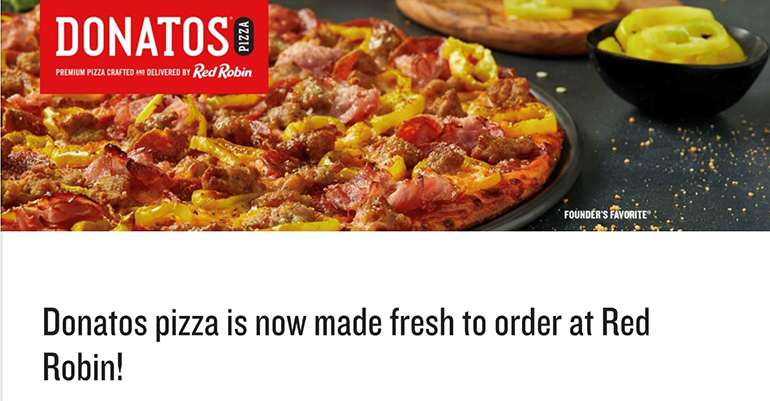 Gordon called the pizza test a “fast leap” to quickly add variety to the chain’s burger-centric menu. Tapping an existing pizza player also saved Red Robin at least a year and half in product development.

“This is a faster market solution,” he said.

In late May, during her first earnings call as interim CEO, Moore said swift action was a priority.

For the first quarter ended April 21, Red Robin reported a 3.3% decline in same-stores sales. On May 31, the 570-unit company closed 10 underperforming restaurants. Seven were in enclosed mall locations.

Eroding guest counts, problematic for the entire industry, have also plagued Red Robin. In the first quarter, traffic dropped 5.5%. That followed a 4.4% decline in the fourth quarter.

“As our financial results demonstrate, there is still much work to be done on the turnaround, and we are moving with urgency,” Moore said.