Some states are moving to restrict COVID 'vaccination passport' mandates
Apr 07, 2021
Texas and Florida are among the states that have preemptively banned or restricted government agencies and... 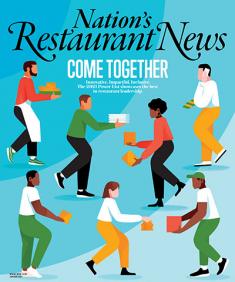 Steakhouses master off-premise options to survive during the pandemic, including takeout, delivery, virtual wine dinners and cooking classes
Apr 07, 2021
The goal is to maintain new revenue streams as dine-in returns

Trending this week: Taco Bell unveils development plan and more on when the Restaurant Revitalization Fund applications are opening up
Apr 01, 2021
See what's popular on NRN.com

How Hooters is relying on its wings to move forward after #MeToo and COVID-19
Mar 26, 2021
The brand is beginning to franchise its Hoots virtual wings brand

Don’t let ‘COVID-coma’ impair your reopening
Mar 25, 2021
How to shake off the cobwebs of a year of inaction and freshen operations
Load More