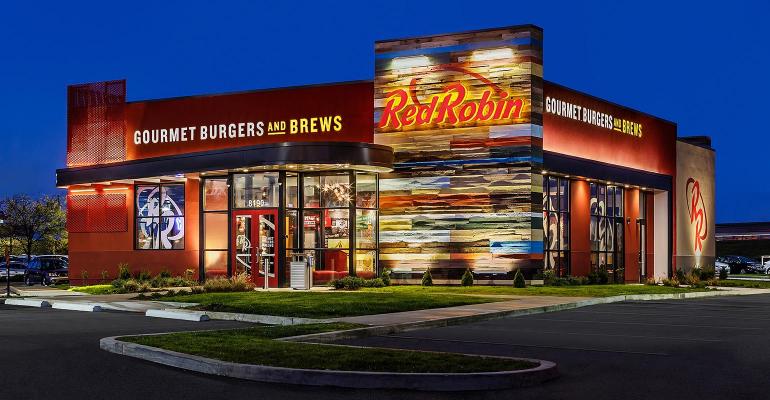 The Greenwood Village, Colo.-based casual-dining company is tapping technology, such as waiter headsets, to speed the guest experience and is looking to streamline its menu offerings further, brand leaders said on a first-quarter earnings call.

“We know we can improve the overall guest experience, shorten wait times, reduce walkaways, have cleaner dining rooms and effectively identify and resolve potential issues by continuously getting our managers on the dining room floor and at the host stand during peak hours,” said Guy Constant, Red Robin’s chief operating officer.

But Pattye Moore, Red Robin’s interim CEO and board chair, conceded, “There is still much work to be done on the turnaround, and I can assure you we are moving with urgency.”

Red Robin’s traffic was down 5.5% in the first quarter, even while off-premise and delivery sales were up 20.6%. Same-store sales declined 3.3%.  Alexander Slagle, an analyst with Jefferies, said in a note that Moore “seems to be elevating the urgency and focus on improving the dining experience and reenergizing this core part of the business (nearly 90% of sales).”

To improve the in-store dining experience, Red Robin has deployed waiter headsets to its team, which Lynn Schweinfurth, Red Robin chief financial officer, said would “help us better achieve the gift of time for our guests.” Hand-held point-of-sale devices will be completely rolled out by August, she added.

Moore explained that “while this may seem like a minor point to some it has allowed our operators to turn tables faster and to stay more engaged during a busy shift.” She added that the hand-held devices will allow team members to input orders at the table to improve accuracy and ticket times.

“We have narrowed our culinary focus to concentrate on improving the consistency and quality of our core menu products,” he said, adding that the brand had reduced its menu by about 10% over the past several years.

“We have some more simplification being rolled out later this year,” Constant added, with more items being removed after testing.

Moore said Red Robin will continue to work at building off-premise and catering sales. The total off-premise business is at 11.6% of total revenues. Catering represented 1.2% of Red Robin’s sales through the first quarter, more than double the amount in the same period last year.

“We believe catering continues to represent a big opportunity for us — essentially all incremental,” Moore said. “We also believe it increases brand awareness and relevancy. In 2018, we built a strong foundation for catering that included building out our strategic leadership and infrastructure. We began adding sales team members supported by targeted marketing.”

In addition to the 10 closures announced Thursday, seven of which are in enclosed malls, Schweinfurth said Red Robin is evaluating its portfolio and will selectively franchise some units. Traffic at enclosed mall locations, which included 76 units in the Red Robin system, performed about 300 basis points worse than the remainder of the company owned locations, she said.

“All related leases allow us to go dark, and we will pursue all sublease and lease termination options as quickly as possible,” she said. “We also continue to focus on improving the financial performance of other underperforming mall and non-mall locations through negotiated rent concessions catering and targeted marketing and sales building strategies for restaurants once they improve their operations.”

The company had 572 units at the end of the quarter, with 483 of those company-owned.