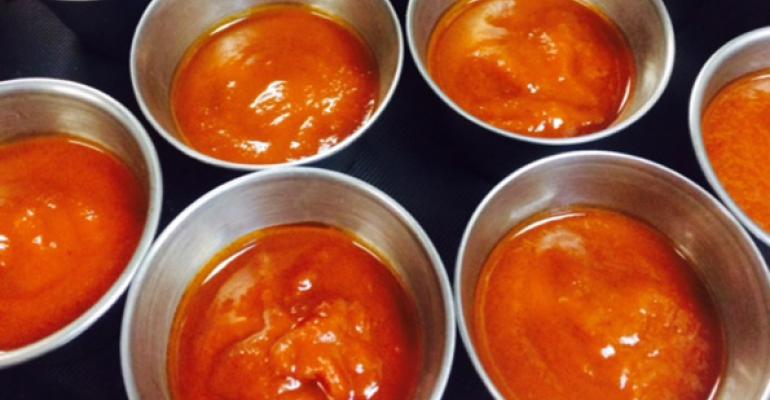 Specialty ketchup on the rise

Chefs pass on bottled condiment, create their own versions

Bottled ketchup has long been the standard at restaurants, but chefs are increasingly passing on the bottles and offering housemade versions.

Though it costs more to make from scratch, chefs say it’s worth it for a variety of reasons, including the ability to select their own choice ingredients, control the flavor profile and eliminate corn syrup.

“We make it so we know what goes in it and control the flavor profile,” said Allan Javery, executive chef of Copperwood Tavern in Arlington, Va. “Ours is richer, smoky and less sweet than the brands that add a ton of sugar and corn syrup.”

The main ingredient in Javery’s sauce is smoked tomatoes, which, like nearly every ingredient at Copperwood, is sourced from local farmers within a three-hour drive from Washington, D.C.

Javery isn’t the only chef messing with ketchup. According to recent research from Datassential MenuTrends, specialty ketchup has experienced tremendous growth on menus, growing more than 100 percent in the last four years. Specialty ketchup includes housemade ketchups, as well as flavored ketchup varieties like habanero, beet and curry.

Also making his ketchup own is Tony Maws, chef/owner at Craigie On Main in Cambridge, Mass. It started about five years ago, when Maws was putting the finishing touches on his now-famous Craigie Burger, a grass-fed beef patty topped with Shelburne farm Cheddar, lettuce and onion on a housemade milk-style bun.

Maws struggled with how to incorporate ketchup, which plays the important role of adding richness, acidity, saltiness and umami flavor to the burger. But letting customers pour from a bottle of Heinz didn't seem right, so he created his own ketchup using tomatoes, dried spices, mace, vinegar, onions, garlic, ginger powder and anchovy. Maws tops the burger with the sauce and also serves a bit of extra on the side.

At CharBar Co. from Hilton Head Island in South Carolina, chef Charles Pejeau makes his own ketchup as a way to not only control the flavor profile, but also eliminate waste. His ketchup is made from the restaurant’s tomato scraps and a mix of ingredients such as cloves, black pepper and Worcestershire sauce. Pejeau says the result is a “different yet familiar condiment that is normally just outsourced,” adding that customers love it.

Among the many other restaurants cooking up their own ketchups are Second Home Kitchen + Bar in Denver, which creates a chipotle ketchup for dishes such as its grass-fed meatloaf sandwich, and Three Degrees restaurant in Portland, Ore., which prides itself on using sweet, fresh-peeled tomatoes, tomato paste, spices and real cane sugar for its ketchup.

“There are just some things I think you can’t mess with,” said Sharkey.

Before opening Bark five years ago, Sharkey says he tested a variety of ketchups and even tried making his own, but none, he felt, compared to Heinz. What he says he likes best about Heinz is the delicious, clean flavor, and that it's a complement, not a competitor, to the food that he works so hard to create.

“For me, ketchup is one of those things that is more about the sauce and less about the person making it,” said Sharkey. “The beauty of Heinz is that whatever you are eating it with, [the food] is still the star.”