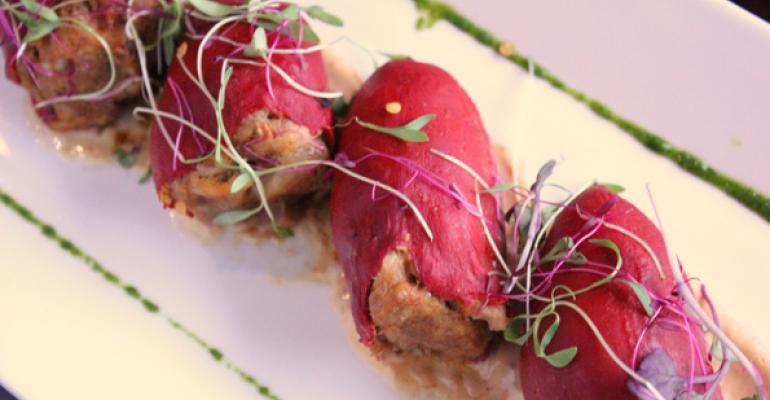 When Jacksonville, Fla.-based Firehouse Subs was looking for a way to add more healthful options to its hot submarine sandwich menu, co-owner Robin Sorensen wasn’t sure it was possible.

“Full flavors and great taste. How do you do that in low-calorie?” he said. “I wasn’t sure how much flavor you can get with fewer calories.”

But Sorensen discovered it could be done — with the right sauce. In February, the fast-casual chain rolled out its under 500-calorie menu, featuring a selection of sandwiches with the same amount of protein as its signature hearty subs, but with less bread and cheese, and topped with reduced- or zero-calorie, yet flavorful, sauces. Among the most popular new offerings is Sriracha Beef, made with roast beef, Monterey Jack cheese, lettuce, tomato, onion and light mayo on a light wheat roll and topped with the chain’s housemade spicy Sriracha sauce.

“The great thing about Sriracha is that it’s very low in calories and it delivers more flavor,” said Sorensen. “It’s has a smooth flavor, not too hot … it jacks the flavor up.”

Firehouse isn’t alone. Restaurants of all kinds are searching for new ways to satisfy diners’ desire for healthier fare without sacrificing flavor, and many are finding it in Sriracha and other bold, ethnic sauces.

According to Datassential Menu Trends, Sriracha, a hot sauce made from a paste of chili pepper, distilled vinegar, garlic and salt named after a coastal city in Thailand, and chimichurri, an Argentinian sauce made of finely-chopped parsley, minced garlic, olive oil, oregano and white or red wine vinegar, top the list of fast-growing flavors with a health halo. Both sauces have grown more than 100 percent on menus since 2013.

“[Chimichurri] is great because it contains olive oil, vinegar, lots of strong flavors from the herbs and garlic,” said Hall. “It’s light, not high in calories, but flavorful.”

Hall has also used Sriracha on his menu in a hot sauce for chicken wings.

At Palo Alto, Calif.-based Asian Box, a fast-casual concept dedicated to fresh, sustainable and healthful ingredients, all sauces are made from scratch, including Sriracha, to ensure they are low in fat and sugar. Asian Box CEO Frank Klein said the four-unit chain specifically uses Sriracha to add a punch to food, and notes that Asian Box customers enjoy trying the sweet, spicy flavor on their food for the first time.

Similarly, Wok Box Fresh Asian Kitchen, with locations in Canada and the U.S., uses Sriracha and other alternative “flavor enhancers” because the brand is committed to serving sauces without additives, preservatives or MSG. Sriracha is the main ingredient in most of the chain’s spicy sauces, including Singapore Cashew, Kung Pao and Pad Thai, and a mainstay condiment on tables.

San Diego-based Souplantation and Sweet Tomatoes restaurants have been launching a number of dishes that feature trendy ingredients with a health halo. In September, the 130-unit chain will introduce Sriracha Slaw, made with shredded bok choy and green cabbage, red bell peppers, corn, carrots, cilantro and Sriracha-coated sunflower seeds all tossed in a Sriracha Ranch dressing.

“Tastes have changed over the last decade moving toward more exotic flavor profiles with some heat. Sriracha, in particular, is a product that is very popular right now,” said Rick Van Warner, spokesperson for Souplantation and Sweet Tomatoes. “We've incorporated numerous so-called super foods into our menu items and have received very positive response from guests when we do.”

Correction: July 16, 2014  An earlier version of this story misspelled the last name of Firehouse Subs' co-owner. It is Robin Sorensen.