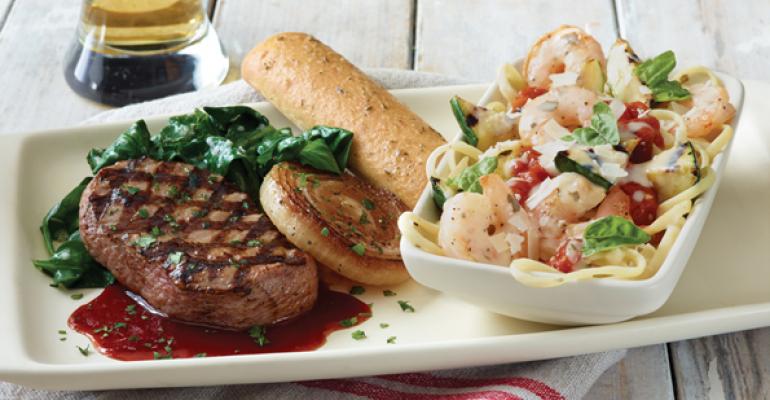 The flexible menus aim to offer guests more options, as chains work to draw younger customers and get regular customers to visit more often, consultants say. They also intend to provide a new alternative to two-for-one offers that were popular during and after the recession.

“Who wants to be locked in to the same old choices?” Kerr asked. “‘Two for $20’ is a nice value option, but it’s become old hat, so here come new options to the rescue.”

In this new menu strategy, guests have the freedom to create their own combinations:

• The 2,000-unit Applebee’s Neighborhood Grill & Bar brought back this week its limited-time “Take Two” offer, which lets guests pair any two selections from its five-item Applebee’s Taste of Summer menu, starting at $10.99.

• The 1,500-unit Chili’s Grill & Bar debuted in late spring its “Southwest Pairings” menu, where customers can create two levels of combinations (two items for $8 or three items for $9.59) from among 10 selections, such as tacos, tostadas and enchiladas.

• The 837-unit Olive Garden, as part of the “comprehensive menu evolution” it unveiled in February, introduced a new “Cucina Mia” section on its dinner menu that lets patrons mix and match six pastas and five sauces for $9.99. Proteins are an additional charge.

“The beauty for the operator is that the offering is similar to a small-plates option, but the guest isn’t necessarily trading down too much with a ticket over $10,” Kerr said. “So there’s new news, and at a price low enough that ordering a glass of beer or wine and dessert can still be less than a $20 proposition per guest.”

Applebee’s, the Kansas City, Mo.-based division of DineEquity Inc., cited its own research on Millennial customers as its incentive for bringing back the “Take Two” offering.

Applebee’s said a survey of 2,090 adults, conducted by the research firm Toluna, found that among respondents ages 18-29, six in 10 men and 46 percent of women routinely asked their servers for more time to order, or jumped at the opportunity to order last.

“With ‘Take Two,’ Applebee’s is the cure for all of us — myself included — who can’t bear to choose between our cravings,” said Peter Czizek, Applebee’s vice president of culinary and menu strategy, in a statement.

“Item composition definitely factors into profitability and the success of these programs,” Kerr said. “Olive Garden may be better-positioned in that area, with its $9.99 pasta and sauce option than Applebee’s and Chili’s are, given the steak, chicken and shrimp options they are offering.”

“Guests will likely make a value distinction here, so traffic and results could differ for these concepts based on customer reception of the items,” Kerr noted. “Mix-and-match is a way to control portion in a transparent manner, so that’s an added feature of this type of program.”

Chili’s, when it unveiled its new menu in late spring, said it was expanding its Fresh Mex menu with new value offerings, as well as increased options for patrons to customize their meals. The company said the “Southwest Pairings Menu” yielded more than 250 possible combinations.

“It’s clear that the options abound and operators are putting in extra effort to grab their share of wallet this summer, which is a challenging time in light of recent commodities increases,” Kerr said.

“At a time when families are on vacation, and cooking is not a high priority,” she added, “this is strategic innovation for operators hoping to boost performance between now and Labor Day.”