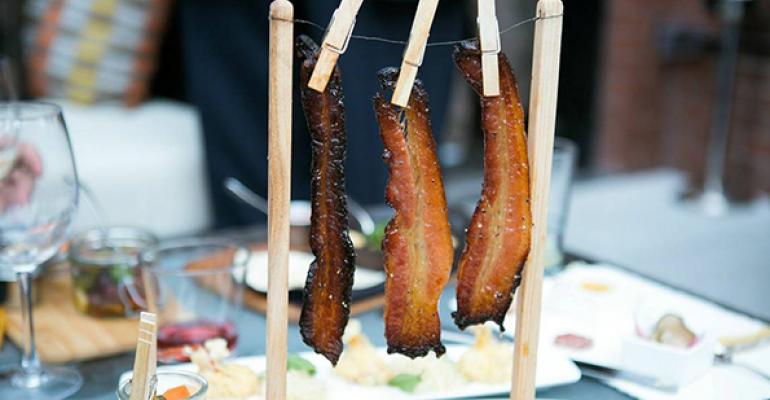 Chefs add interest with snacks and drinks with complementary tastes

Chef Jason Hall of Max’s Wine Dive in Atlanta thinks about flavor the way an artist or designer might think of color: he’s always looking for combinations that work well together.

“Flavor is much like color in that it works better when paired with a complementary. When we taste a single flavor, we tend to get fatigued. It becomes dull and lifeless. But when it's paired with another flavor, it has something to contrast with, it becomes more interesting,” said Hall. “Just as a savory dish benefits from a little acid, a salty dish benefits from a little sweet.”

For the bar menu at Max’s, Hall combines the opposing flavors of salty and sweet in PigCorn, a snack made of caramel corn tossed with cayenne, Georgia peanuts and bacon, served in a movie theater-style popcorn bag. Think of the classic combination of chocolate-covered pretzels or the ubiquitous salted caramels, only as a bar snack alongside beer, wine or a cocktail.

A number of chefs at independent or small chain restaurants are also innovating with salt and sweet as a way to add interest and increase sales at the bar.

At Tamo Bistro & Bar at the Seaport Hotel in Boston, chef Robert Tobin accidentally created the Dirty Martini, a salty and sweet combo of fried blue cheese stuffed olives served with honey harvested from the hotel’s rooftop beehives. Initially, Tobin was just making the fried blue cheese stuffed olives, but after a first taste he thought they were too salty. He tried several variations in cheese, olives and crust, but nothing solved the problem. Then, while making a spicy-and-sweet dip, Tobin tried some honey and knew it was a perfect solution.

“What is better than warm, sweet honey with a contrast of salt flavor?” said Tobin.  “It all becomes balanced, but the salt brings out the sweetness of the honey and vice versa; the savory flavor of the olives is enhanced by the honey.”

Part of the hotel’s rotating Nibble & Bits snack menu, Tobin says the Dirty Martini is among one of the most popular items precisely because customers love the flavor profiles of salty, savory and sweet.

Other chefs are getting their salty and sweet on with bacon bar snacks.

For Adin Langille, executive chef at Spyglass, the rooftop bar at the new Archer Hotel in New York, offering bar snacks that combine salt and sweet, such as his Candied Bacon, is all about balance.

“Having salty and sweet while washing it down with a nice cocktail or beer balances all the flavors perfectly,” he said.

Langille also literally balances the dish’s presentation. Inspired by the way bacon is hung when it is smoked and cured, the candied bacon is served dangling from a miniature clothesline with clothespins.

Also serving a sweet-and-salty snack as the perfect complement to beer is Jon Keeley, executive chef at Rustic House in Chicago. Keeley offers a Snack Trio made up of maple-peppered bacon, duck-fat almonds and marinated olives.

“I think the salty and sweet flavors are appealing in a bar snack because there’s nothing that goes better with a beer than salty and sweet,” said Keeley.  “It’s perfect if you’re coming in for a quick beer at the bar because the salty-sweet bacon just adds so much flavor to a beer.”

Similarly, bar patrons at Rowdy Hall in East Hampton, N.Y., can order sweet bacon with a side of tangy blue cheese. Passionate in his love for bacon, chef Justin Finney dredges thick-cut apple wood smoked bacon in a mixture of sugar and brown sugar, slowly cooks it in the oven, and serves it with a housemade blue cheese dipping sauce.