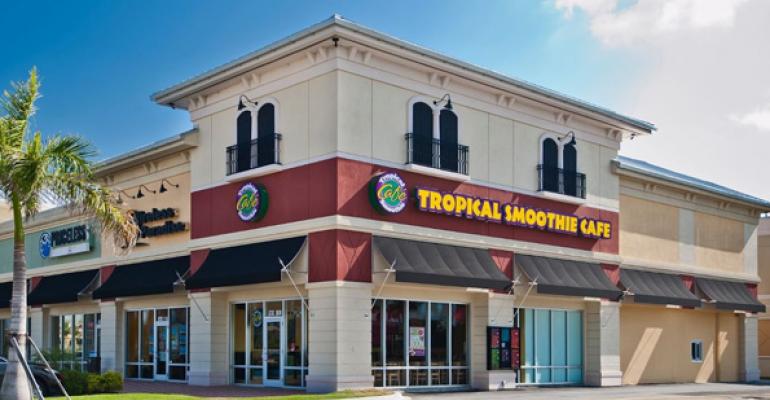 After the first quarter of 2014, many quick-service restaurants reported a long winter in which severe weather hurt their same-store sales, but Atlanta-based Tropical Smoothie Café shared a much sunnier picture.

Chief executive Mike Rotondo said the food-and-smoothie chain’s outperformance was due to much more than its strong footprint in warmer states in the Southeast. Much of Tropical Smoothie Café’s unit expansion is happening in the Mid-Atlantic, Northeast and Midwest. The brand’s menu innovation, including the successful introduction of Island Green Smoothies, helped grow same-store sales 6.4 percent in 2013, after increasing 1 percent in 2012.

Through the end of May, Tropical Smoothie Café’s same-store sales have risen 9 percent year-to-date for 2014.

Atlanta-based private-equity firm BIP Opportunities Fund L.P. acquired the chain in 2012 to kick-start its growth, and this year the firm has provided capital for an internal Franchisee Finance Program to turn Tropical Smoothie Café’s promising single-unit operators into multiunit franchisees. The program has helped the brand stay on track for 55 openings in 2014 and target 80 new locations next year.

What began this three-year run of same-store sales growth? What decisions did the brand make that allowed for so much expansion?

If we want to continue to win, we have to make people No. 1. When you go back to when the brand was purchased by BIP, I started to have the flexibility to add more people to the team that could take the brand to the next level. … Everything we did had that focus, from the team at the support center, to being more collaborative with our franchisees, to me focusing on myself as a leader. All that trickles down to making the customer experience in the cafes, and that’s where the big payoff comes.

A lot of that menu innovation started even earlier, when we rolled out flatbreads and the like several years ago. When we introduce new products, the customers seem to respond. Last year, when we rolled out tacos for the first time ever, they were the No. 1-selling item during the period we promoted them. The same thing happened with Island Green Smoothies — they rocketed to the top, and now they are 7.1 percent of total sales, right after its first anniversary this past March, and that number continues to climb.

This year, it will be more of the same, with the Cucumber Mojito Smoothie. We have another green smoothie with spinach and kale coming, this time also with celery and cucumber. We’re also working on a fresh beet smoothie.

Did you have to innovate on the funding side for your franchisees?

One of the things blocking people from becoming multiunit franchisees is they couldn’t acquire financing. Maybe they weren’t in business long enough for traditional SBA loans to work for them, but they’re great operators, and we believe in them. So we do a complete check on these people and underwrite the loan. We’re the bank, and BIP helps put the financing together.

To date, we have approved a dozen loans, and those loans together exceed $2 million for our franchisees, who already have opened two units this year, with eight more to open through the end of the year via this program. It’s not offered to anyone who isn’t a franchisee yet, and that’s key. The operators see that we care about their growth and their profitability, specifically for existing franchisees to get that second or third or fourth store open.

What have you had to do differently now that growth has accelerated to an average of one opening per week?

We’ve added resources on the real estate and construction side of the business. So much of the game is the follow-up on the opening checklist. We need a lot of individuals now to help with blocking and tackling and keeping franchisees on pace. We’ve also added more franchise business consultants and will be adding more operations support people next year. … As we’re climbing the hill, we’re adding resources and people, and we’re not waiting until we get to the top, because we still don’t know what the top is.

The Carolinas are really just exploding right now. Long Island [N.Y.] started the year with 12 stores and will have 18 by year-end. In Michigan, we already have stores in Detroit, and the secondary and tertiary markets will add stores this year. This brand has worked everywhere. We just opened successfully in North Dakota. But some of our strongest average unit volume growth is coming out of the state of Florida, where we’ve been since the beginning and where we have 120 stores.

What’s the biggest pressure, either on the food cost or labor cost side, that you have to manage through right now, even with sales and unit growth?

We’re in the same boat as everybody on the labor side of the business. It’s a potential landmine for us moving forward. On the controllable side, we’re doing a good but not great job. It’s a big focus for us this year, and we’re investing a lot of time and effort into systems for franchisees to better control labor and food cost. We have a program launching the next 30 days that is an inventory program to help franchisees get closer to their theoretical food cost.

But we don’t see anything on the horizon that portends big increases in cost of goods sold. We sell a lot of chicken, and half our business is in smoothies, where there aren’t any big issues with fruit. Overall, we have about three to four points in improvement in profit margin that we’re going after. The flow-through on a 6.4-percent increase in sales last year was positive, and if we see the same flow-through if we’re up 9 percent this year, that will continue to fuel our growth.