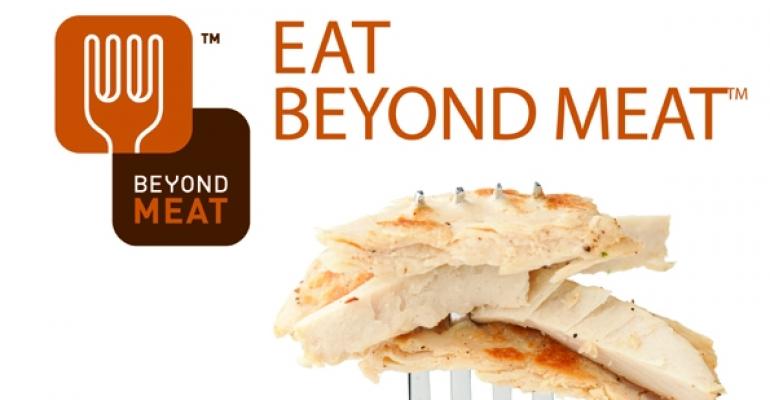 Tropical Smoothie's Beyond Meat is made from plant-based proteins and will become a permanent menu item.
Consumer Trends

Chain aims to attract vegetarian and vegan customers with Beyond Meat

“We’ve always had vegetarian options, but this was new for us to step up and say we’re committed to them,” Rotondo said. “Now we’re taking a stance and we’re saying we have great food options and we want this community to know they’ve got great options…. It’s definitely a strategic move on our part.”

Beyond Meat, made from soy and pea protein, can be used in any Tropical Smoothie Café menu item that normally uses chicken, Rotondo said. The company doesn’t charge extra for the meatless protein.

The company decided to go with Beyond Meat instead of tofu or seitan because it has the texture of real chicken meat, he said.

“It isn’t anything that’s selling like crazy right now…but it is bringing in new people,” he said of the product. “There are vegans and vegetarians who are looking for specific items like this.”

Rotondo said it’s too early to tell exactly how much Beyond Meat has been sold at Tropical Smoothie Cafés; the product was first introduced in May. However, he said, the goal is to have Beyond Meat make up about 10 percent of all chicken items sold.

Chicken, he added, makes up 70 percent to 80 percent of the company’s menu mix.

But, menu mix isn’t the only goal, Rotondo said. Bringing in new customers and having varied offerings are other key objectives of the meatless products.

Tropical Smoothie Café isn’t the only chain trying to attract more vegetarians and vegans. In June, Chipotle extended the test of its tofu-based protein, Sofritas, to all of its California locations.

Generally, Rotondo said, Tropical Smoothie Café customers are health-conscious consumers. The Island Green Smoothie — made with kale, spinach, mangoes, pineapple and banana — is its best-selling smoothie by far. The chain sells more than 50 percent more of those smoothies compared to next best-selling smoothie, he said.

“It’s crazy,” he said. “It verifies for me that people want healthier options, but if it doesn’t taste good, it’s not going to sell.”

Atlanta-based Tropical Smoothie Café has 340 locations systemwide. The company opened 16 restaurants so far this year, with 25 more openings scheduled for the remainder of 2013, Rotondo said.