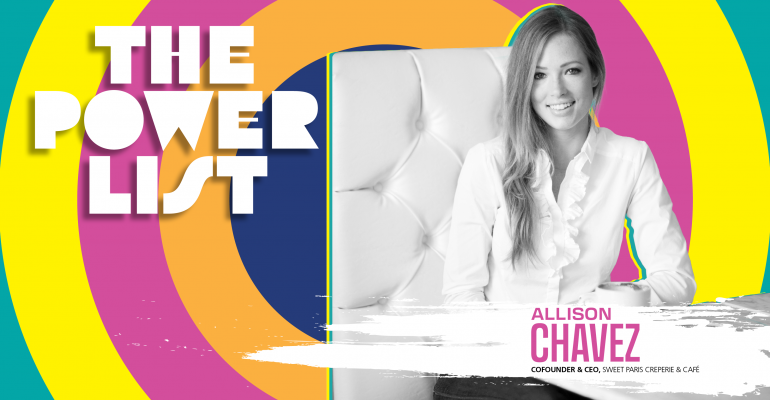 “The opening of the first store collided with the rise of Instagram. … People were taking pictures of their food and sharing it with their friends,” said Allison Chavez, CEO and cofounder with her husband, Ivan, of the Houston-based Sweet Paris.
News>People

Crepes take on a new size at Sweet Paris Creperie & Café in Texas. Like the Lone Star State itself, the crepes are supersized from their Parisian counterparts, one of the standout factors of the 11-unit chain.

“The opening of the first store collided with the rise of Instagram. … People were taking pictures of their food and sharing it with their friends,” said Allison Chavez, CEO and cofounder with her husband, Ivan, of the Houston-based fast casual. “And a lot of our marketing and communications just happened naturally from our customers, which was also amazing.”

That’s how the café was able to expand, growing to 10 units in Texas and one in Mexico in less than 10 years with a French vibe and large, stuffed crepes.

“We try to transport people out of the hustle and bustle of the city and take them somewhere else,” she said.

That somewhere else is Paris. The bistro tables, light-colored walls, flowers and café design are meant to transport the customers to the city of lights, with music included.

But while the design may be French, the crepes are decidedly “Texas-sized,” and Chavez has ensured that Sweet Paris fits neatly within the Instagram-worthy lifestyle of millennial and otherwise younger customers.

“We have made sure that the presentation was beautiful every time. That was a big, important part, as well. Obviously, it must taste amazing,” said Chavez. “We must plate it beautifully and then people want to take pictures of it, and that's how the word got out.”

Social media is crawling with well-staged shots at Sweet Paris cafes across Texas, with guests posing in front of one of the Instagram walls in the cafes, an intentional design, according to Chavez.

Another intentional design was to make the café a fast casual rather than casual dining like many creperies in Paris.

“I think the trend of who millennials are is to really push toward fast casual, and that was something we open with because people want fresh, made-to-order food at [a low] price point without necessarily sitting for an hour and a half, two hours,” she said.

The fast-casual model also works well near college campuses, which is where Sweet Paris initially began.

The first location’s opening almost 10 years ago was such a success that it even inspired an instant remodel to accommodate all the orders.

“We just had such a warm welcome [in Texas] that we had to remodel our kitchen within six months because we had planned for a very quiet, charming opening that was very slow, and we realized that people wanted their Texas-sized crepes and we needed to deliver quickly,” said Chavez.

Now, after a pandemic-burdened couple of years, the brand is ready to expand beyond Texas. Sweet Paris recently announced that it would open two locations in Miami in 2022.