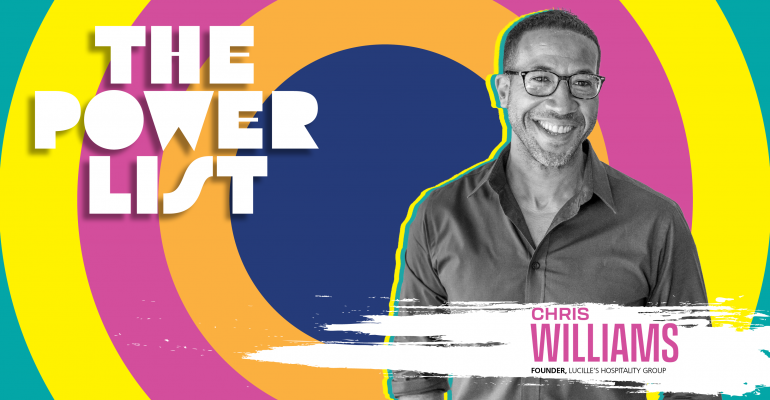 “We wanted to not only give fish to the communities, we wanted to teach them how to fish,” said Chris Williams, founder of the nonprofit and the restaurant group.
News>People

Like many restaurant groups during the pandemic, Lucille’s Hospitality Group started battling food insecurity by offering meals to under-resourced communities. But as the restaurant group recovered and continued its growth — with three new concepts to launch in 2022 — it also spun off a nonprofit effort that has taken on a life of its own.

Lucille’s 1913, as the nonprofit arm is called, has served more than 375,000 meals to those in need in and around Houston. And in January, the group is breaking ground on 10 acres of land south of the city that will become a working farm to raise fresh produce for the historically Black community there.

“We wanted to not only give fish to the communities, we wanted to teach them how to fish,” said Chris Williams, founder of the nonprofit and the restaurant group.

Williams describes the area as a food desert, where residents are forced to drive 15 miles to the closest grocery store. Working with Prairie View A&M University and a farm partner, Lucille’s 1913 plans to hire about 40 people to work the land at about $12 an hour — about $9,000 more than the medium income of folks in the area, he added, “and the beauty of it is that they’re serving their own community.”

Through community markets, the produce will be available to locals for about 60% less than the cost from grocery stores, and the farm will also supply the nonprofit’s meal distribution program.

In addition, Dawn Burrell, a partner chef with the group who’s on deck to helm the new restaurant concept Late August coming in 2022, has created a fermentation lab that will take useable fruit and vegetable trimmings to create products like collard greens kimchi, chow chow or pickled okra. The products will help reduce food waste and create another revenue stream for the restaurants.

Vegetable and fruit trimmings from the restaurant that can’t be upcycled will be composted to nurture the soil at the farm, a process that also reduces food waste and helps reduce carbon emission.

And finally, Lucille’s 1913 is also offering foodservice job training, because Williams believes “if you can cook, then you’ll always have a sustainable career path.”

Williams’ restaurant group is known for its flagship restaurant Lucille’s, founded in 2012 and named for his great-grandmother, Lucille B. Smith, who was a pioneering entrepreneur, educator and chef.