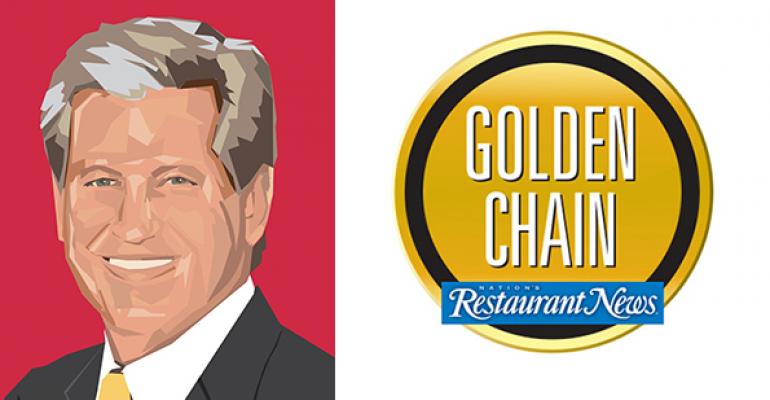 More than 30 years ago, John Miller began his restaurant career as a busser and cook. Today, he serves as president and CEO of Denny’s Corp., one of the largest family-dining brands — a role he took on in February 2011.

Before joining Denny’s, Miller served as CEO of Taco Bueno Restaurants Inc. and earlier spent 17 years with Brinker International Inc. At Brinker, he held such management positions as president of Romano’s Macaroni Grill and president of the Mexican concepts division, which included On the Border Mexican Grill & Cantina and Cozymel’s.

Under Miller’s leadership, Denny’s has worked to improve the quality of the chain’s menu, roll out a  restaurant remodel plan and enhance customer  service. Last month, Denny’s said it expects to see its strongest same-store sales growth in a decade, with expectations of a 5.5 to 6.5 percent climb at domestic company-owned restaurants.

The Spartanburg, S.C.-based Denny’s system  includes more than 1,700 franchised, licensed and company-operated restaurants around the world with combined systemwide sales of $2.6 billion.

Here, an excerpt from Miller’s conversation with Doug Brooks, Golden Chain winner in 2003, and Norman Award recipient in 2010. Brooks and Miller worked together for nearly 17 years at Brinker.

Doug Brooks: You inherited a 60-year-old family-dining brand with 1,700 locations — so, a big job — but the results have been amazing. Tell us about today’s Denny’s.

John Miller: My position, and that of all my peers, requires a ton of focus and lots of hours. The days can get long at times, but it is rewarding work. Denny’s is a labor of love, and it’s an iconic brand.
And like any assignment, there’s the soundness of the brand positioning, there’s the ability to mobilize and motivate teams to execute more consistently. There’s questions of image, environment, reputation, price, quality of offerings, too big a menu, too small a menu, does it appeal to millennials?

Our franchisees are really the most responsible for the progress at Denny’s, and I predict, the more we listen, the more we collaborate. Doug, you said it quite enough that it stuck: Collaborate or die.

DB: I know that you’ve been inspired, or mentored, by people in your career. What special insights have you gained?

JM: I’ve had the great privilege of working with some terrific people, and had many great mentors in my life. The founder of Taco Bueno and Casa Bonita enterprises, Bill Waugh, was very influential for me, and certainly Norman Brinker taught me so many great things. I think that the most important one was just the importance of caring. Both were extraordinary men in their uncanny control of a room. They had unbelievable confidence, and they had this certain expectation of, just, excellence. They brought out the best in everybody.

It was amazing to see mentors who taught me that you really need to see the person first, and both Norman Brinker and Bill Waugh were both extraordinary champions of that. And, I’ve got to say, Doug, that you were a fine mentor as well. And keeping with this theme of caring, even in your toughest assignments, [you] always showed that people matter and that you really cared.

DB: What traits do you look for in restaurant leaders, or when you’re choosing and developing leaders at Denny’s?

JM: I try to put it into six little buckets. How you develop them is tied to the fact that] you have their best interests at heart.

Secondly, you want to demonstrate that’s true, by your actions, and the actions you expect of your leadership team. Third, you want to give persistent, timely, honest, and constructive feedback, in an environment where that’s expected. Four, I expect great things from people. Five, put them in a position of their strength, so they can win, and then, push the responsibility down and empower people. Before you’re able to apply that leadership [philosophy], there’s certain traits you’re looking for. You look for honesty, you look for energy, people who can keep pace in a very demanding industry.

DB: I know from working with you at Brinker for 17 years, and then, knowing you as a friend many years after that, you’re an incredibly generous person.

JM: We are very proud of our team and their efforts. In early 2011, right after I joined, the company was sort of going through this re-evaluation process and learning how to engage nationally. A group of pretty influential franchisees made it very clear to me [that] restoring our heritage as one of America’s best brands was not an option, but a mandate. And part of any great brand is, at the heart, helping those in need.

We created this program called Hunger for Education. And of course, we are huge supporters and believers in the No Kid Hungry charity effort. This is focused on breakfast after the bell, summer meal programs and education, not only so that no child goes hungry, which is heartbreaking enough in itself, but then, also, makes sure they learn, so the cycle of poverty in our nation is improved. I also serve on the Wilberforce University Board of Trustees.

You might be asking: ‘What’s an old line cook doing on a college board if he never went to college?’ The work is extremely rewarding. Wilberforce is the oldest historically black college in America, and like many Historically Black Colleges and Universities, it’s struggled. The [board position] allows me to see, firsthand, that our most precious possession in our nation — our children, our young adults — have an opportunity for education.

DB: What concerns do you have about the industry, and also, what are you optimistic about?

JM: I think our industry has a very promising future. At Denny’s, our purpose statement is simply this: We love feeding people, whatever they’re hungry for. And I believe that, throughout the industry, we’re full of like-minded people with a similar type of purpose, striving every day to serve and support guests everywhere not only with options of their choice, but also with the critical infrastructure that’s required to drive our economy, and future success.

I’m very optimistic about [the] improving quality and the choices that we offer these days. And I believe, also, that there will be a better-educated population around a better-understood set of nutritional guidelines, which will lead to a healthier lifestyle for future generations in America, as well. I’m proud that our industry will be at the center of providing that.

Doug Brooks, Golden Chain winner in 2003 and Norman Award recipient in 2010, interviewed Miller for this report. He and Miller worked together for nearly 17 years at Brinker.