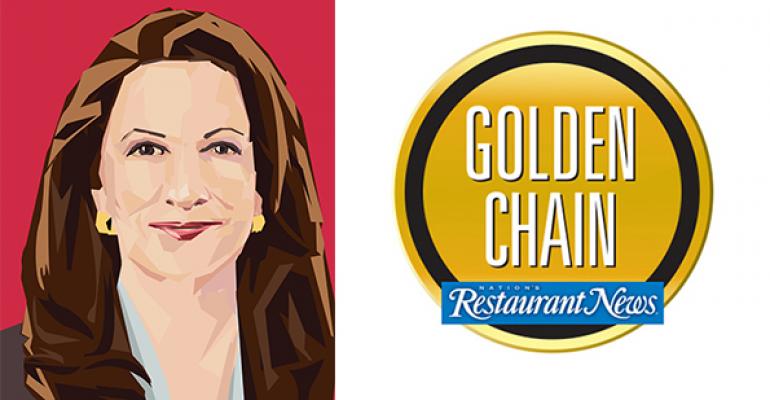 That’s no small job, which Stewart famously rose to after starting as a waitress at IHOP at the age of 16.

DineEquity now boasts 2,013 franchised locations of Applebee’s and 1,651 mostly franchised IHOP units. Stewart’s 2015 Golden Chain Award honor comes 11 years after her designation in 2004, when she was CEO of IHOP.

Aylwin Lewis: When you were 16 and waitressing at IHOP, did you ever expect to end up leading the largest restaurant chain in casual [and] family dining?

Julia Stewart: Well, I can’t say I knew I’d lead a company like DineEquity, but I always knew I wanted to lead. I think that first job began a lifelong love affair with the restaurant industry. I found it fun, exciting and extremely rewarding to be able to be part of a team providing so many people with a warm, hospitable and enjoyable experience where they could come to find good food, good service. And all these years later, I still do. I think one of the things I love about our industry is the constant and instant feedback, whether from tips as a server or input from a franchisee. We know how we’re doing every day. We aren’t left wondering, especially in today’s world of social media.

AL: So could you tell us a little bit about your journey? Give us the highlights.

JS: It’s been a wonderful journey, always in the restaurant business. I started out, as you know, at IHOP, and then went onto college and worked in a restaurant as well in college, and then when I graduated from college, my first job was actually at an in-house ad agency. I met Carl Karcher on a plane. He invited me to interview at Carl’s Jr. and the rest, as they say, is history. That’s a true story.

So I started out in marketing for chains such as Carl’s Jr. and then Burger King, both domestically and abroad, and then Spoons Grill & Bar, which was part of Saga, and ultimately Black Angus. And then after all those years in marketing I made a strategic decision to quit marketing and quit my job, and I went into operations. I was on an advanced management recruit program at Taco Bell, went into general management at Applebee’s, and then ended up as CEO of IHOP. So it has been a wonderful career in fast food, casual, fast casual, and family dining.

AL: Who has inspired you or mentored you in your career?

JS: First and foremost, my father. He was a teacher, and he taught me the value and the joy of learning, the importance of intellectual curiosity and constantly seeking for new information. I think there’s always something more to learn from all different types of people, and I truly believe that’s a critical skill in any company. I think there are too many mentors in the restaurant industry to mention, but I think one of my primary mentors was Bob Leonard, who started in the restaurant industry when he was 14.

He spent his career at both IHOP corporate and then subsequently as a franchisee, and he knew this industry backwards and forwards. Bob was incredibly generous. He was a kind man, both personally and professionally. I learned a tremendous amount from him about the business about how to treat people, and I’ve tried to pay that forward. Really, for the rest of my life, I will try to pay that forward.

AL: Our industry’s under fire lately. Any comments on how you view the industry and how we can improve our image?

JS: I think the restaurant industry is a tremendous training ground for success. That’s our presence. It’s our legacy. I don’t see that changing any time soon. We offer a tremendous opportunity to grow, and as an industry, we probably should tell more of those stories more often. I think that’s really the opportunity for all of us in the industry.

AL: You’re talking to a group of young industry leaders who are just starting on their career. What advice would you give them?

JS: I would probably say really do what makes you happy, and find things that make you happy. I’m a big believer in that.  I think people need to find what genuinely makes them happy and go for it. I think the greatest gift is to be able to do what brings you joy, whether that’s profit, nonprofit, and whether that’s small or big.

A lot of people also still believe that there’s this straight career path that you have to go. You get this job, then you get a bigger job, then you get a bigger job. In this environment and with today’s multi-national companies, just being able to transfer into one function or do something to really broaden your skillset — going sideways, and crooked, down, and around, and about — I think that’s invaluable to learn different skills and bring different perspectives.

AL: So you have an opportunity to invite three people to dinner, and they can be current or historical. What three people would you invite?

JS: Wow, that’s a great question. Well, I think Martin Luther King because he was such a change agent. I would love to hear his perspective. I think there’s a whole inside story there I’m not sure we ever heard or knew. I also probably would invite Jack Welch. I’ve met him, but I’ve never been able to spend quality time with him and think about how he changed the face of corporate America, GE. I would love to hear some of that insight. And I would probably invite one of the most famous women entertainers who sort of did it her way, just to hear how they made it in a tough environment. Probably like an Audrey Hepburn, somebody who challenged the status quo.