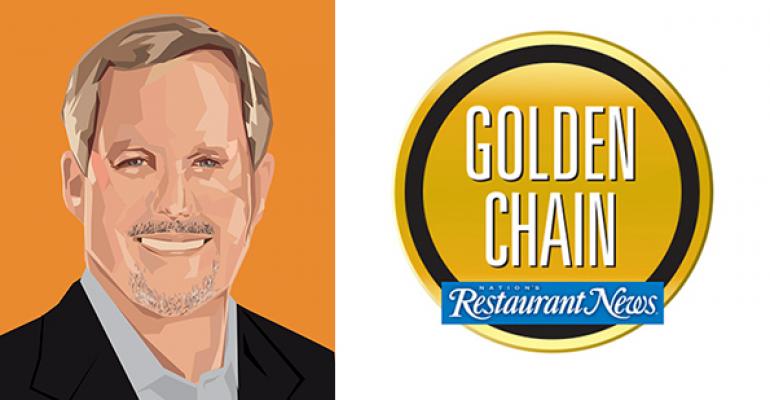 As CEO and president of fast-casual Wingstop Inc., Charles R. Morrison oversaw one of this year’s most solid initial public offerings, raising $110.2 million in a June market debut.

Morrison, since taking the helm of Dallas-based Wingstop in June 2012, has also led growth in the chicken-wing chain’s sales, profits and footprint.

In 2014, under then-owner Roark Capital Group of Atlanta, Wingstop booked a sales increase of 12.5 percent, to $679 million, and a net income rise of 20 percent, to $9 million. The company has also seen its unit count grow from just more than 500 locations in 2012 to a total of 785 in the first half of this year.

Prior to joining Wingstop, Morrison served as president and CEO of Pizza Inn Holdings Inc. (now Rave Restaurant Group Inc.) and oversaw the creation and launch in 2011 of the fast-casual Pie Five Pizza Co.

Morrison has more than 20 years of restaurant financial and management experience. He served as president of Steak & Ale and The Tavern Restaurants for Metromedia Restaurant Group. He has also held management positions at Kinko’s, Boston Market and Pizza Hut.

At Wingstop, Morrison also has been instrumental in expanding the brand internationally, increasing the company’s offshore presence from 12 in Mexico in 2012 to 52 restaurants abroad.


Steve Romaniello: I’d like to have you talk a little bit about what you did to establish the culture at Wingstop and maintain this productive company culture that you have.

Charlie Morrison: It started almost the first day I got here while I was just learning about the organization. This is a company that’s had amazing success for many years, but in order for us to move to the next level and really grow, it required making sure that everybody was engaged in the direction that we wanted to take the company.

So that’s really where it started. I had to set a vision, not only in terms of what we wanted the organization to achieve, but a vision in terms of the type of people that we wanted in the organization on a go-forward basis. And we rallied the team around it. That has been a process. It doesn’t happen overnight. You don’t just send out a memo and make that happen. It really has been a process that starts with how we hire people, and then making sure the people we hire don’t just have the requisite skills, but also have some more of the softer elements and emotional intelligence that’s necessary to drive an organization.

SR: Excellent. Another important stakeholder is the franchisees, and I’d love to hear your thoughts on the importance of franchisee relationships and communication.

CM: When I first got to Wingstop, we were facing one of the biggest challenges I think this company has faced in a long time, with wing prices in 2012 as high as they’ve ever been in history. That created a lot of challenges for us, and especially for our franchisees as it impacted their bottom line. So the first step in any relationship with franchisees, just as it is with anybody else, is to listen and communicate.

A big piece of the equation for me is to make sure that I get out and meet our customers, the franchisees, and spend quality time with them to learn their business, seek their advice, to counsel them, and then have honest conversations. That’s going to yield a much improved culture.

Leading one of the most successful restaurant IPOs

SR: Who has inspired you or mentored you in your career, and what special insights did they give you?

CM: I’ve been very blessed in my career over the years to really develop and hone my approach and my skills by a number of different people who have inspired me. [At] the PepsiCo organization of Pizza Hut, I was able to watch and learn from folks like Steve Reinemund, who was our CEO at the time. When I got to Kinko’s before it was FedEx Office, great leaders like Joseph Hardin and Gary Kusin were people who inspired me as a leader.

Everywhere I go, every organization I’ve been a part of, even including Wingstop with you, there’ve been so many people who have taught me so many different lessons in my career. I was taught very early on in my career that your job is to learn, and the more you learn the more you grow. The more you grow, the more opportunities present themselves for you.

And I think the second thing is what one former CEO and a mentor of mine told me when I became the CEO: You have to treat it like you were just given the keys to the building, and with that comes responsibility for everything within, and recognize that you got a sense of ownership now and commitment, not only to the organization but truly to the people.

SR: What is the professional accomplishment in your career that you’re most proud of?

CM: There are a lot of things I’m very proud of. Being able to run companies is a great milestone, but I think most recently I would say taking Wingstop public. It was an absolutely amazing experience for me personally as well as for the company, and it really takes a lot of effort and a lot of time. There’s a lot of process to go through, and it really causes you to really examine your business very carefully.

So coming out of that with one of the most successful IPOs in the history of restaurants certainly is a great accomplishment for me.

SR: Wingstop’s future certainly sounds great, but the restaurant industry itself has come under fire lately. Any comments on how you view the industry today, specifically any thoughts on how it might improve its image?

CM: I think there are a couple areas certainly that we can all take note of as it relates to the industry coming under fire. One is around legislative acts and practices that are impacting our profitability, and the other is around consumers challenging us to ensure that the products we have provide the healthy options that they demand of us.

I think the image, any image you want to improve, starts first with communication and to some extent transparency, right? Making sure that people understand how you source your ingredients, how you prepare their products, and then what’s the impact that’s going to have on the consumer I think is a big deal.

As it relates to the challenges of some of the legislative activity, for us, we’ve got to be prepared to react to it and make sure people understand what we do in the business, and what we do to take care of the people who have a talent that they bring to the table.