/sites/all/themes/penton_subtheme_nrn/images/logos/footer.png
Recent
Recent
San Francisco based Lazy Susan aims to be the Domino’s of Chinese takeout
May 19, 2022
The first NFT marketplace for restaurants could be the next frontier in digital loyalty
May 19, 2022
Subway Cares Foundation™ launches to support communities around the world
May 19, 2022
Trending: Executive shuffles at Brinker, KFC
May 19, 2022
Tina Gantz appointed vice president of franchise development for District Taco restaurant chain
May 18, 2022
Featured
Tech Tracker: Toast launches POS solution for quick-service restaurants
May 17, 2022
Meet 4 emerging NYC concepts
May 16, 2022
Memphis Seoul brings Korean BBQ and Southern cooking to Brooklyn
May 11, 2022
Executives on the move: 13 restaurant leaders with new positions in April
May 03, 2022
MUFSO
brought to you by 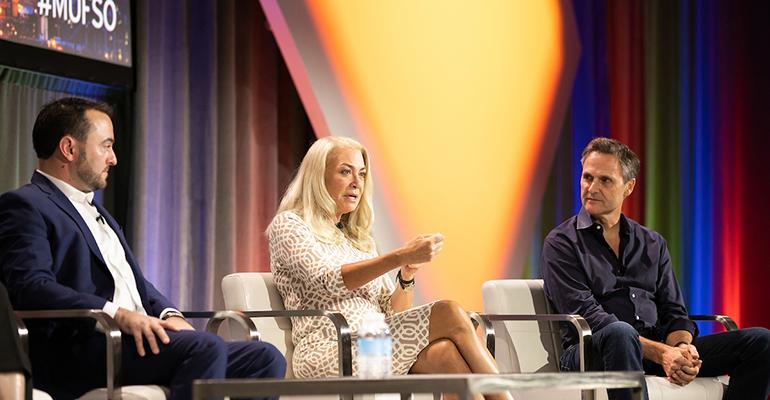 Restaurant trends to watch in 2020

Insights from the Nation’s Restaurant News MUFSO conference in Denver

The annual MUFSO conference — which this year was in Denver for the first time — ended on Wednesday, wrapping up a three-days of educational sessions, celebrations and networking for the nation’s top restaurant industry leaders and suppliers.

The event attracted a wide range of attendees from across the country, from national chain CEOs to independent operators, who came looking for solutions, and perhaps a bit of inspiration and relationship building with their peers. They also enjoyed a taste of Denver’s vibrant restaurant scene.

Here are trends from this year’s MUFSO show: 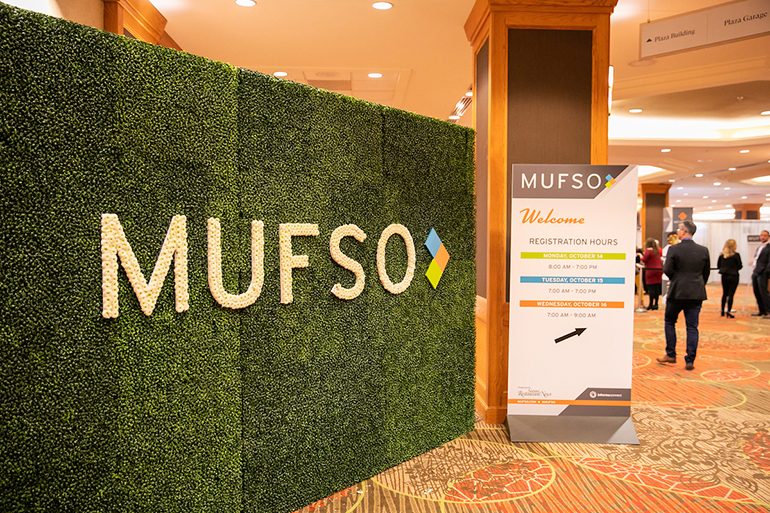 Related: MUFSO 2019 kicks off in Denver

We asked operators on the show floor what was the greatest challenge to their brands today. Here’s what we heard:

Labor pains: “The greatest challenge I’ve always had and always believe will be in front of us is people. Not the lack of people, but the continued need for good people,” said Mike Speck, CEO of Palo Alto, Calif.-based Asian Box.

“We can buy products. We can negotiate real estate. But each and every day, it’s our folks on the front line that are building our business for us. There’s only one of me, there’s a thousand of them. The workforce is so important.

“And tied into that is all the regulations and legislation that’s coming against us. It’s making it very challenging to do business,” he added. “There are a lot of topics out there, the Fight for $15 — we passed that a year ago.  … We’ve already learned how to work with it. We pay way above minimum wage. Insurance regulations, we’re covered across the board. We just build all that in. And unfortunately, we often have to pass that cost onto the consumer, so it has raised the cost of the product.”

The cost of sustainability: “I’d say our greatest challenge, which is also our greatest opportunity, is the pricing of the sustainable supply chain. For us our brand, or DNA, is all about sustainable seafood. The subsidiary that goes along with that is sustainable packaging and produce, etc. We have made that commitment, it’s who we are, but there’s kind of a disconnect between what the consumers want and what they’ll pay for. So we’re always trying to manage that gap — the ‘say-do disconnect,’ which I heard on an NRN webinar last week,” said Andrew Gruel, founder of the Huntington Beach, Calif.-based Slapfish.

“We need to educate them on it, but then it comes down to: Are they willing to pay more for it.”

Brand visibility: “There are so many [challenges] right now but the biggest one is just breaking through. We have an incredible product, we have great service, hospitality. And there’s a lot of other competition. Getting that word out in the community of who we are, where we are and what we offer I think is really the challenge that I’m trying to overcome right now,” said Jeff Melnick, president of Boston Pizza, based in Dallas.

“We’re searching [for solutions]. Everyone’s on social media. People aren’t looking at the television, radio is becoming pretty insignificant anymore, so we’re really trying to find something that will break through and help us identify ourselves in the markets we’re in, since we’re spread across the country and only one or two restaurants in a particular market.”

On a panel diving into Gen Z preferences, Owen Klein, vice president of global product innovation for CKE Restaurants, said the plant-based Beyond Famous Star burger at Carl’s Jr. has brought in a new, incremental customer. Since the launch in December 2018, the chain has sold more than five million.

“It’s been incredibly surprising the response we’ve gotten from the product,” Klein said. “Surprising how much bigger the flexitarians [are] than the data we had going into it. It’s sustained.”

CKE is now testing all-day plant-based analogues for Hardee’s in two major markets, he said. The patty is a different shape than the animal-based patties so employees won’t mistake a beef burger for a plant-based one in the kitchen.

Such products help their brands “bust out of the sea of sameness,” which is one of the keys to success in menu creation when trying to reach the Gen Z customer, he said. 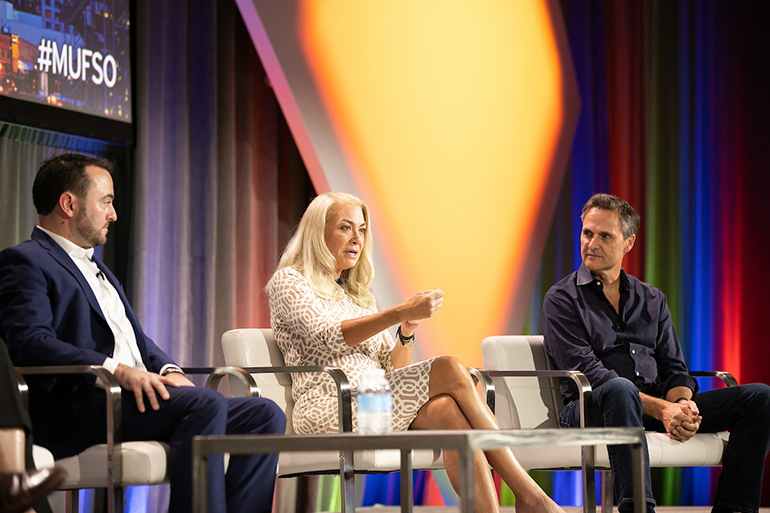 Liz Smith, executive chair of Bloomin’ Brands Inc., was an early casual-dining adopter of delivery, saying the company started working on it about four years ago. “Order accuracy and speed are table stakes,” she said. “You don’t get a second chance to get it right.”

Smith said delivery was a natural extension of the company’s consumer focus. “We wanted to be where the customer wanted to enjoy us. People wanted our food, but sometimes they wanted it in the privacy of their own home,” she said.

“I’ve never been a fan of people talking about cannibalization,” Smith continued. “If that’s what the customer wants, either you give it to them, or someone else will.”

Bloomin’ built their own delivery network that was omnichannel, she said. They spent two years perfecting the in-store model to make sure they could meet customer expectations. Then the company added partnerships with third-party delivery players as another leg. 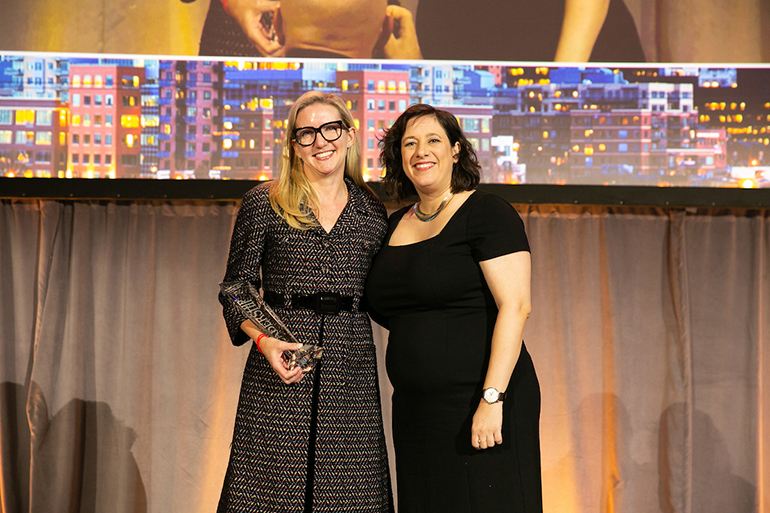 Julie Felss Masino, Taco Bell’s North America president, said technology allows the chain to know more about the customers they serve. “The more I know, the better I can serve you,” she said. “We want to make sure the experience is consistent and that what you love, we can give you. Technology is a big enabler, it helps us get to scale faster. It helps us stay connected.”

Sam Fox, founder of Fox Restaurant Concepts, said his restaurants use technology to connect with guests and improve their experience. But it also helps with labor.

“Technology helps with speed of service, whether it’s using an app or mobile pay, or looking up calories posted. The more knowledge we can give to guests ahead of time, the more it can help with throughput,” he said.

He also pointed to reservation services like OpenTable. “We used to have three hostesses at the front desk and today you can almost get away with no hostesses,” said Fox. “Now we have OpenTable — though it’s expensive, so we’re trying to build an internal platform.”

The inevitability of a $15 minimum wage was a clear theme during a breakout session titled “5 ways to handle rising wages.” Panelists urged attendees to accept that fact, and begin building plans to increase efficiency and boost retention sooner than later.

“If your growth strategy is Nebraska and Kansas, you’re good,” said Joe

Kefauver, managing partner of Align Public Strategies. “But if your growth strategy is to grow where the people are, then a $15 min wage is going to be a reality. That environment is not going to change anytime soon.” He added that the conversation had moved beyond $15 in some areas.

Michael Lastoria, CEO and co-founder of &pizza, echoed the sentiment.

“We’re going there. Accept it,” he said. “What are you going to do tomorrow in your business to prepare for it and make it a competitive advantage?”

The first step, said Stephanie O’Rourk, partner at CohnReznick LLP, is  reviewing in-depth sales reports, so all operational changes are backed by data.

“If you’re not looking at your POS and labor data on a daily basis, you’re behind the game,” she said.

—Becky Schilling and Christi Ravneberg contributed to this report