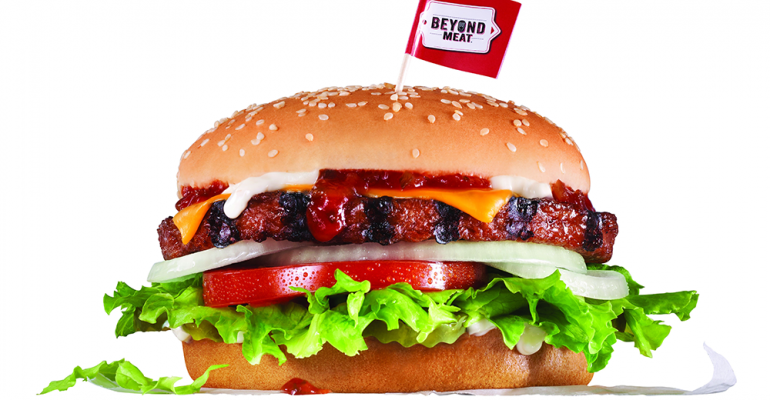 The fast-food industry’s experimentation with plant-based proteins hit a major milestone today with Carl’s Jr. launching a burger made with a Beyond Meat quarter-pound patty.

The Nashville, Tenn.-based chain, a subsidiary of CKE Restaurants, said it is now the largest national burger chain to serve a Beyond Meat product. The limited-time burger, dubbed Beyond Famous Star, will be available through spring at roughly 1,100 Carl’s. Jr. restaurants.

In a follow-up interview with Carl’s Jr., the company said the quarter-pound patty will be “shipped to our restaurants frozen and tempered until ready for the charbroiler.”

Vegans and vegetarians should take note. The company said the thawed product is cooked in the same appliances as regular beef patties.

“The Beyond Famous Star burger is assembled in kitchens that also prepare animal-based products and byproducts,” the company told NRN. “The cooktops are used for both patties.”

The burger has the same build (beyond the patty) as the Famous Star, but with a much different price.

The Beyond version starts at $6.29. However, the price varies by location. For example, a Carl’s Jr. in Orange, Calif. was selling the Beyond Famous Star burger with cheese for $7.29. The regular Famous Star with cheese sold for $4.39 at the same location.

At other Southern California locations surveyed by NRN, the price of a regular Famous Star ranged from $3.69 to $5.48.

The signature burger, founder Carl Karcher’s favorite, was chosen to showcase the alt-protein because it’s the brand’s “most iconic burger,” Klein said.

This is not Carl’s Jr.’s first vegetarian option. Customers can swap a beef patty for a fried zucchini patty, Klein said.

While Beyond Meat is reserved for the Famous Star, customers can substitute the plant-based product on any burger for a $2 per patty upcharge.

Klein said the chain made the Beyond Meat leap to meet changing consumer preferences, which include a desire to limit or avoid animal proteins.

The number of restaurants serving plant-based proteins from suppliers such as Beyond Meat and Impossible Burger has stepped up in recent years.

Consumer demand is driving the trend, which has expanded this year beyond healthful-oriented restaurant brands. In mid-September, White Castle expanded its test of Impossible Sliders to all 377 restaurants in 13 states. The $1.99 slider is made from a plant-based patty created by Beyond Meat rival, Impossible Foods.

In December, Del Taco expanded a test of Beyond Tacos (left), made with Beyond Meat, to 21 restaurants in Southern California. The expansion came after the Lake Forest, Calif.-based chain saw a positive response from a smaller test at two Del Taco locations in Century City and Santa Monica, Calif. That trial started at the end of September.

The $2.49 taco is made with seasoned, plant-based meat that resembles ground beef. It can also be substituted for proteins on other menu items including burritos, nachos and fries, Del Taco said.

Update, Jan. 10, 2019: This story was updated to clarify the cooking method, price and availability of the Beyond Meat burger.

This story has been updated with new information about the price of the Famous Star burger.
TAGS: Menu Food Trends
0 comments
Hide comments
Related
Sponsored